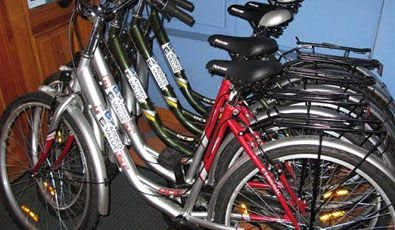 As part of the ADDED VALUE Project, the Healthy City Bureau of Vilnius recruited 5 hotels who were encouraged to promote cycling to their guests. The hotels were selected due to their proximity to local parks and also the old town area that is affected by heavy congestion. The initiative included cycle training for hotel staff and a cycle hire scheme linked to each hotel. 28 hotel employees took part in the training sessions and about 500 guests used the cycle hire scheme during the 2009 summer period.

Hotels, guest houses, camping sites and other tourism service providers were invited to take part in the project. Five hotels were eventually selected to participate in the project due to their location to the city centre and also local parks, so that cycling was an attractive and easy option for them>The initiative contained two main components;

The innovative cycling initiative proved a success during its trial period. Prior to the scheme been implemented, a survey amongst hotel employees found that the vast majority were in favour of such a scheme as it would boost the attractiveness of the hotels.The cycle hire service proved popular with hotel guests with over 500 hotel guests using the cycle hire scheme, during the 2009 summer season. Further a survey of visitors to Vilnius showed that over three-quarters of them thought it was a good idea.Following the success of the scheme, it has now been included by policy makers into the 2020 Strategic Development Plan. The service continues to be offered as part of the ADDED VALUE project, and it is planned to extend the scheme to other hotels in coming years.Details of the initiative were presented on youtube- Youtube"
Topic:
Archive
Country:
Lithuania
City:
Vilnius
Contact:
Danguole Vaitkiene
Author:
Danguole Vaitkiene
Keywords: