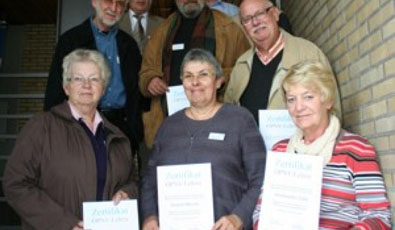 With its programme for elderly people, LNO aims at enabling members of this target group to make good use of public transport in order to maintain and improve quality of life.In the train-the-trainer model, LNO trains bestagers to become teachers for the use of public transport. When having completed their education, the trainers are able to circulate the information they got to other elderly people.

Train-the-Trainer is a method which helps to find multipliers for the idea of using public transport and also a way of spreading information in accordance with the specific demands of the target group.

Partners are a special trainer, own staff members, the police and institutions for elderly people. Currently, LNO recruited complimentary trainers and prepared the first instructions which took place at the beginning of October, 2009.

After the first instruction of the trainers has taken place, they are free to choose dates of circulating the information. LNO of course supports them (e.g. through technical devices, instruction material…).

The activity takes place in the framework of the European Project ICMA (Improving Connectivity and Mobility Access) in which LNO participates; in this context, the activity is supported by rundum mobil (Switzerland).

With its programme for elderly passengers, LNO reacts to demographical changes. Mobility is a need that does not disappear when people get older but their possibilities of being mobile are continually decreasing: Many elderly people are not able or willing to drive a car because of increasingly stressful traffic or because it is too expensive - or they do not feel physically fit.

In order to still participate in social life, mobility can be provided by public transport. Thus, the programme aims at informing elderly people about the opportunities public transport offers and also tries to help to minimize mental barriers in the face of the use of buses and trains.

The specific target of this measures is to give elderly people a chance to participate in social life by means of mobility and to support a stronger use to capacity of public transport in order to reach a more environmentally friendly mobility. Moreover, LNO is convinced that it is easier to learn from peers, particularly for the target group of elderly people.

Most importantly, people aged 55 and older are addressed by those measures. LNO tries to target those elderly people who are still living unaffiliated or those who live in homes for aged but maintain a high percentage of physical mobility.

First, LNO had to plan for trainers and instruction material for the activities. In the planning process it was determined how LNO could recruit personnel (complementary trainers) for the programme.

In terms of human resources, for preparing the instruction sessions approximately eight man-days were needed; for preparing the needed material and for organising press work and marketing activities, six man-days had to be invested.

Designing and producing of the instruction materials cost approximately five to six thousand Euro. The funding of the activity was shared: 50 % of the expenses are paid by the European Union (LNO accomplished those activities in the frame of ICMA “Improving Connectivity and Mobility Access”, a European Project); the remaining 50 % are paid by LNO itself.

To recruit the trainers, LNO contacted all homes for the aged, the local association for senior citizens and various other assemblies. Press work (print media and radio stations) and Internet information accompany the activity.

Firstly, the train-the-trainer sessions were held at the beginning of October 2009. The instruction was held in two sessions on two following days. Afterwards, the educated elderly people will be supported in organising their own instruction sessions. If there should be a high fluctuation of trainers, LNO will organise new trainings in order to keep the model alive.

A major challenge is to keep the system running: once the complementary trainers are educated, LNO has to make sure that they keep giving trainings in order to guarantee the circulation of the information.

The success of the initial trainings is supposed to be monitored just as much as the success of the sessions the complementary trainers will hold themselves afterwards. LNO's target is to implement two training sessions of each complementary trainer each year. Hence, all sessions held will be monitored and it can be evaluated whether LNO has reached its aim.

So far, there are still lessons to be learned and the current status is to see how the instructions are going. Crucial for the implementation of the whole activity was to firmly plan the whole project and to bring together all partners in the activity.

The major factor of success is that the educated trainers hold instruction sessions themselves regularly. The quality of the instructions and to observe if the sessions convince elderly people to use Offenbach's public transport are also of importance.

LNO considers the activity to be well applicable for other cities and communities. It is a lot of work to arrange the instruction material (which needs to be individual for each public transport system), to organise the sessions, to recruit the trainers etc., but it appears to be a good model for contacting and convincing a target group which is otherwise hard to get in touch with.

And as the demographic change is an international phenomenon, the train-the-trainer programme will hopefully also make sense for cities and communities all over Europe.