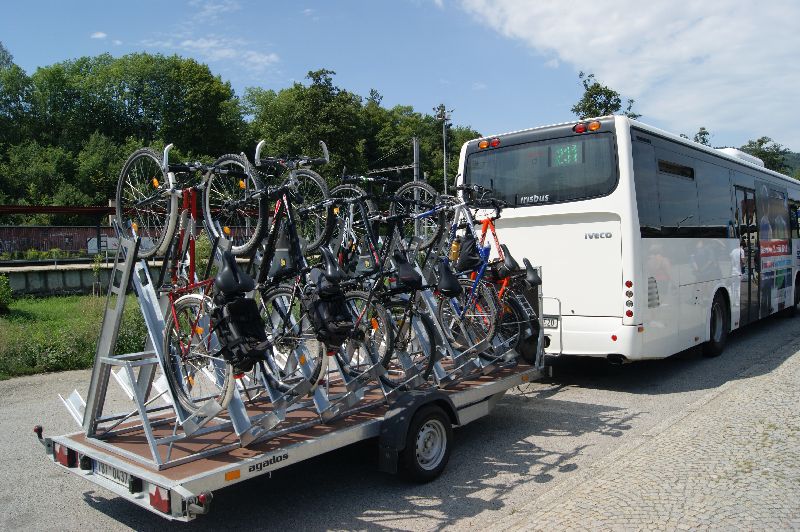 Bus lines were equipped with trailers and trains were given additional compartments to transport the bicycles, allowing visitors to travel easily to and cycle around one of the most attractive regions in the Czech Republic.

South Moravia is in the south-east of the Czech Republic, bordering Austria and Slovakia. Its area of nearly 7 200 km2 has about 1.17 million inhabitants. One-third of the region's population lives in the capital Brno.

South Moravia Region is one of the most popular regions of the Czech Republic and is visited by about 1 million visitors each year.

Although the railways offered bicycle transport for some years, in April 2012 South Moravia and IDS JMK began introducing a number of measures that would boost ways for cyclists to be able to take their bicycles on public transport while travelling to the region.

This included equipping buses on 12 routes with trailers for the transportation of bicycles (available on weekends from the end of April until end of September). Trains were also expanded; more bicycle compartments were included as part of wagon compositions and added to two new train connections that previously did not have this facility. New tariffs for bicycle transport on railways and buses were also added.

In 2015, most local IDS JMK and Brno trains have facilities for transporting bicycles.

The service enables cyclists to travel by public transport to a starting point of a bicycle route, or to use public transport for their return trip. A day ticket for one bike costs 70 CZK (€2.60); a single trip ticket for a bike is equal to a regular passenger ticket.

The buses on existing lines had been equipped with external carriers (for six bikes) or trailers (for 20 bikes). Each trailer costs about € 2 000. Since the regional buses and trains would be running anyway there were no additional operational costs.

The new railway and bus line connections for bicycle transport have proven to be very popular with the number of passengers on some bus lines substantially increasing – forcing IDS JMK to run an extended scheme in the 2013 summer season.

Approximately 2 500 tourists a year use these buses to transport their bikes while over 20 000 take their bikes on trains. Even if the use of the 'bike-buses' is comparatively marginal, the systematic approach of introducing cycle-carrying facilities on both modes of transport has increased the numbers of cyclists visiting the region. Moreover it doesn’t increase the operational costs.

For travellers wanting to use these facilities there is good quality information available, through leaflets and a website, that explain the how to transport bicycles using public transport and interesting cycle-tour possibilities. The service is focused especially for domestic cyclists who would like to make one-day trips.

The project is also linked with the national strategy for the expansion of cycling 2005-2013, and in the future further measures will be implemented. A new bus line in another part of South Moravia will be launched as soon as the tendering process for a new bus operator is concluded.

Because of the long-standing co-operation of the responsible authorities and public transport companies, this initiative was realised smoothly with support of all stakeholders.

Herbert Seelmann, a Brno traffic engineer involved in the project, said: 'The service can be applied in other regions with attractive bicycle routes as well. It is a relative low-cost measure which makes a region more attractive for bicycle tourism, being a healthy and sustainable form of recreation.'

KORDIS JMK's Vojtěch Elstner said, 'Other regions who consider to implement such a system [should consider] that the trailers make the buses longer and not all narrow streets are passable for the buses. A detailed check of the intended route is essential before the start of the service.’