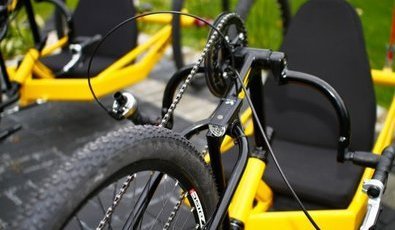 From 14 April 2013, people with disabilities can rent handbikes at the transport node M?ociny Metro station. There are six vehicles available. It is the first handbike rental scheme in Poland.

Following the success of the Public Bike Sharing Scheme in Warsaw (see case study 3862) and other Polish cities, the first Polish handbike rental for people with disabilities was opened in April 2013.

Bicycle rental is located at Kasprowicza St. 145, passage way room no.111 B. It has six XCR model handbikes produced by a paraolympic athlete and handbike designer Jaros?aw Rola. The designer reached the peak of Mount Kilimanjaro, among others, on a handbike he made for himself. The bikes have an aluminium frame, waterproof seat, 8-speed derailleur, and 26-inch wheels. On April 13, the bikes were officially donated by the Rotary Club, who provided the funds.

The initiative came from the Foundation for the Elderly and Disabled “Zawsze Potrzebni” and the local Rotary Club members.>One handbike adapted for the needs of a person with disabilities costs about 16,000 PLN (approx.4,000 EUR).

Handbike rental is one of the elements of preventing exclusion of people with disabilities. A new means of transport, previously only available for wealthier people, has become an attraction and has provided the ability to move around the city in a pleasant way. The popularity of the rental constantly increases and its success may contribute to the creation of similar rental points in other districts and cities.