Hajtás Pajtás Bicycle Courier Service : from a SME to a leading actor in Sustainable Mobility (Hungary) 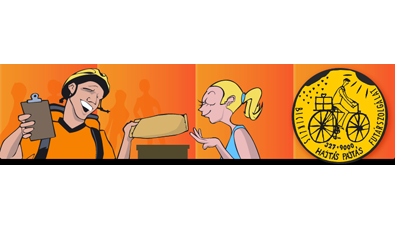 The Hajtás Pajtás bicycle courier company started its operations in 1993 as a three-person enterprise. After a decade of operations it has grown into one of market leaders for local parcel and mail delivery. With a staff of 160 people it frees the congested capital from 100 cars, saving an estimated 150 tons of CO2 emissions annually. The company takes a leading role in promoting biking in the capital and is one of the organizers of the Critical Mass annual biking demonstrations - attracting more than 80,000 people in 2008. What’s more, the company was awarded with the “Business Ethics Prize” in 2007 for the socially and environmentally outstanding business conduct.

The Hajtás Pajtás bicycle courier company was established as a low-budget family enterprise, based on the ideas seen in some Western European countries. The beginning was very difficult, primarily due to difficulties in developing a customer base and the practically non-existent culture of cycling mobility in Budapest. However, after years of hard work the company has evolved into a mid-sized enterprise of great visibility. Although with the increase of size business hierarchy and management systems had to be increased, the “old” values still apply: to show a viable alternative to motorized transport and to keep business ethics on first place.

Hajtás Pajtás is not the cheapest courier service in town, but in terms of quality it is at the top. Service is very fast (unaffected by traffic jams), the personnel tends to be young and motivated (e.g. students) and every delivery can be tracked back in all details through a sophisticated delivery database. With a staff of 160 people the couriers cycle an estimated of 2 million kms a year.A courier typically covers 60-70 km’s a day, and personnel preferences (e.g. distances, working hours or terrain) are always considered when assigning a delivery to a courier.>10% of delivery staff are women - and candidates are accepted even when there is no hiring. Contrary to public opinion, from 365 days only 20-25 days have “really bad weather” - and surprisingly the market demand is even higher in winter than in summer. Although it is not easy to be a courier in the congested city of Budapest with a very limited biking infrastructure, accidents are very few (less than a dozen / year) and minor (healing within 8 days).The original grassroots philosophy is still a main guiding principle in pursuing corporate social responsibility. Unlike the competitors, the company employs all its staff directly, declares the full salary for taxes and provides full health insurance and pension contribution. Hajtás Pajtás has its own music band and sports club. Office workers can rest 10 minutes every hour in a resting corner. 70% of office waste is recycled.Hajtás Pajtás took a very active role in organising the annual Critical Mass biking demonstrations - contributing to a breakthrough of the acceptance of biking in Budapest in recent years.

All in all, Hajtás Pajtás provides a real example that business sustainability can very much be in line with social and environmental values. Hajtás Pajtás has been one of the key stakeholders in the past decade that were at the forefront of promoting biking as an alternative to motorized transport.