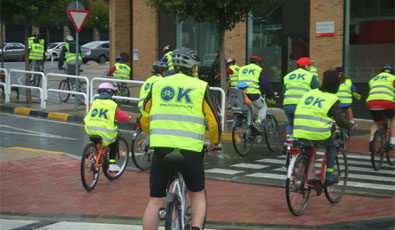 Different surveys conducted among citizens during the drafting of the Cycle Master Plan in Navarra identified that existing cycling infrastructure is not widely known. Additionally, potential users of such infrastructure for their daily trips lack basic information on safety.

Local and regional administrations in Navarra have promoted cycling as a daily mode of transport and have made substantial efforts in improving infrastructure. Further efforts are however required for communication, awareness-raising and training purposes. Surveys conducted among citizens have shown that those potential users who would be willing to cycle in town lack basic information on the existence of cycling infrastructure and on safety. To overcome these difficulties, an activity has been designed combining guided cycle tours on available infrastructure and training on how to cycle safely and respectfully in town. These activities / tools aim to change their daily transport habits to cycling.

Guided tours and training on cycling safely and respectfully in town have been organised in different localities around Navarra within the framework of IEE’s ADDED VALUE project.

The itineraries of the tours have included different types of paths (cycle paths or tracks, lanes open to several modes, etc.), and crossings. This approach has allowed cyclists to become familiar with different situations where safety needs to be guaranteed. The experience was carried out under normal traffic conditions and one monitor was made available for every 25 participants. Training on safety issues and the responsible shared use of lanes or tracks was delivered before and during the tours.>Before the tours, the training was delivered using slide presentations (theory). During the tours (practical part) on-site explanations were given to demonstrate new and significant situations (change of platform, crossings). The total duration of the activity was approximately 2 hours, and the total cost has largely depended on the number of participants and monitors, although in all cases the activity has required substantial communication efforts. Reflective jackets and bands were distributed among participants to ensure visibility and safety during the tours and for them to keep and use afterwards. Most participants used their own bicycles, and in some cases bicycles from the municipal rent-a-bicycle service were made available.

More than 900 people in Navarra have participated in the activities organised 12 times in 10 different localities, during 2009 and 2010.
Most participants stated after the activity that they felt more willing to use their bicycle in town. Some of them were already occasional users and were most satisfied to increase their knowledge of local infrastructure and to receive safety guidelines for cycling in town. Other participants were newcomers to cycling and felt more confident about it after the training and guided tours. Despite similar communication efforts, the guided tours and training organised as isolated events were less successful in winning participants than those being part of a promotional campaign. Although the funds available under the ADDED VALUE project have been used up, the activity remains available for municipalities interested in implementing it.