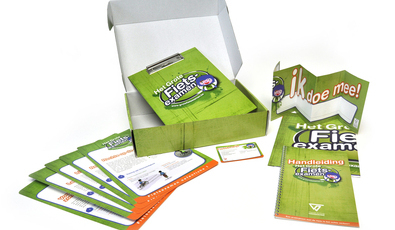 In early 2012 the Flemish Foundation for Traffic Knowledge (VSV) launched a brand new project - the Great Cycling Exam. As part of this project, sixth-grade primary-school classes are offered a ready-made package with tools and communication materials to organise a local-level cycling exam in real traffic.

According to the final goals for primary education in the Flanders region, schools have to prepare children to cycle safely in real traffic by the end of the sixth grade. The Great Cycling Exam is an ideal way to test this and is a good way to round-off traffic and mobility education in primary schools, with a greater emphasis on working on practical skills.

With the Great Cycling Exam, the VSV offers a ready-made package that schools can easily use to organise a local cycling exam. The package includes customised material and a website with preparatory training sheets and forms for final evaluation. The exam essentially marks and helps prepare pupils for the big move to a higher level of education (in Flanders primary school is from ages 6-12; secondary school is from 13-18). This is both a mental and physical shift, as students in Flanders often cycle independently to their secondary school, which is usually further away from home than their primary school.

The Great Cycling Exam was developed in collaboration with Professor Jan Pauwels of KU Leuven and tests the practical skills of young cyclists in traffic. These skills are vital for cyclists to feel safe and to be able to travel independently. During the exam, the students individually cycle a pre-planned route, along which adult controllers check and note-down if the students do everything safely. Afterwards a final evaluation takes place and each student receives a bicycle certificate. The certificate is not really a license, but rather an indication of what skills they have passed and which ones they should practice. As such, parents can also assess how their child is riding his or her bike. The project is supported by the Flemish Government and the insurance company Fidea and targets all primary schools in Flanders and Brussels.

Classes that register at the Great Cycling Exam website receive a DIY kit with:

The first schools to sign up also receive numbered fluorescent vests that can be used during the test. The project cost € 50 000 including website hosting, promotional activities and materials for schools including the DIY-packages and fluorescent vests.

The first attempt of this regional approach has already been a hit. A total of 288 participating classes have shared their results, accounting for almost 6 000 students. The vast majority of participants passed the test successfully. About 80 per cent passed all parts of the exam. This means that they have mastered the five basic skills (cycle correctly on the street, turn right, priority, cycling alongside an obstacle, turn left) and understand general traffic conduct well. This last aspect checks if pupils can recognise and respond appropriately to risks in real traffic.

The pass-rate for girls (82 per cent) was slightly higher than for boys (77 per cent). Also, there were differences by province. Nearly three out of four classes (73 per cent) organised the exam on their own initiative, and just over one in four (27 per cent) used a co-organiser, usually the local council and/or the local police.

Hilde Crevits, Flemish Minister for Mobility and Public Works, was pleasantly surprised by the high success rates: 'A high score is important because nearly 32 per cent of children cycle to school. Good knowledge on moving safely in traffic is essential,' she said. Virtually all participating classes indicated they would participate again the following year, implying that a second edition of the initiative would take place in 2013. Ultimately, the aim is to ensure that each school organises the exam so that all young cyclists are well prepared to cycle on the road.