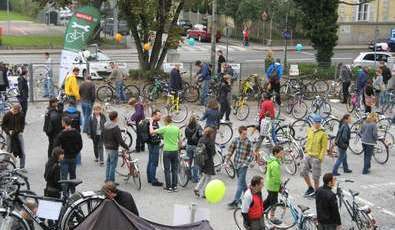 “Find new happiness with an old bike” is the slogan of the twice-a-year ‘used bike fair’ held in Graz. The event is organised by a local bicycle shop with the goal to allow local citizens to exchange used but still roadworthy bicycles. The benefits of this project are the wider promotion of cycling within Graz, as well as to local people who can either earn extra money by selling their bikes, or save money when buying a new one.

Graz is an ideal city for cyclists due to short distances between facilities, access restrictions and restricted speed limits for cars, and the high numbers of students studying in the city. There is a constant demand for bicycles especially for children, for people who cycle occasionally, or for those who want to start cycling. Many people own bicycles which are not used but still roadworthy, whereas many other people are looking to buy low cost bicycles. To bring those people together the second-hand bike fair was organised.The main goals of the ‘used bike fair’ are:

Every year in spring at the beginning of the cycling season the fair takes place for 2 days in the centre of Graz. In 2010 it was held directly at the foot of castle hill, the landmark of Graz. Due to the success of the first event there is a second fair organised in autumn. The driving force for the bicycle fair is the local bicycle retailer and repair company named BICYCLE who set up the event using its own financial resources.>Owners of bicycles bring their bikes to the fair location at the start of the event, where their cycles are checked to see if they are roadworthy. The owners then suggest a price they would like, which on average is about €100, although, start from €20 upwards.Once the fair starts people who are looking for a bicycle come to the fair and search for their ‘new’ bike. The fair operates on a first come-first served principle, so there are usually a lot of people at the beginning of the event looking for a good bargain. Children’s bikes are especially popular since kids grow so fast and need a new bike almost every year. If people are interested in a bicycle they can take themfor a short test-ride.

To organise a bike fair similar to Graz, where at each event about 200 to 300 bicycles are ‘exchanged’ about 15 staff are required. The bicycle shop needs a few days to prepare the fair (receiving and checking of bicycles, preparation of the event location, etc.) and about 1 week after the fair (for cleaning up the fair location sorting out the finances, etc.).Cooperation with a local advertising company is used to promote the bicycle fair.In 2010 the “used bike fair” was arranged in the course of the Styrian Bicycle Festival. The Bicycle Festival aimed to present the bicycle as a mode of transport of the future as well as a vehicle for leisure time and physical activities. During the Bicycle Festival there was a wide range of activities to inspire people for cycling, including personalised advice and artistic performances to promote cycling.See also Video Clip