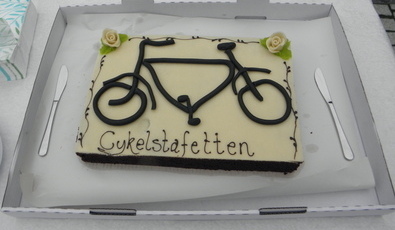 Like many other cities, the city of Fredericia in Denmark wants more people to jump on their bikes. In the spring of 2012, the city tested a new concept: a GPS-based bicycle relay race also known as ‘Cykelstafetten’. The experience shows potential for further development of the campaign.

The city of Fredericia has set an ambitious goal to reach a 25% modal share for cycling. The figures from 2007-2009 indicated a share of 16.4% of all trips and 0.51 cycle trips/day/ person. It was acknowledged that in order to achieve the goal, the city needed to launch new and more effective measures to encourage people to get on their bikes more often.

Previously, the municipality had run a children’s campaign called ‘Around the World in 80 Days’ where GPS technology engaged the target group with great success. Therefore, the city decided to use the same yellow GPS units in an adult context. The result was a campaign called ‘Cykelstafetten’, or in other words ‘Bike Relay Race’.

The rules of the game were simple. When the race began, 25 GPS units were given to 25 citizens who would then cycle for one day, upload the number of kilometres cycled to the campaign website, and then hand over the GPS to someone else in their network. The team whose GPS had covered the most kilometres and had changed users the most times wins a prize.

At the opening event, the captains received their GPS device, entered their team on the website, and went on their first bike ride to be recorded. The captains were, among others, city councillors, local business leaders and editors of a local newspaper, well-recognised people in the city who have the potential to distribute the campaign message widely and recruit people to participate. The campaign had its own website that included an overview of all teams and a map of their routes cycled as well of the number of times the GPS had changed hands.

The campaign lasted for two months with 40 week days to cycle on and it was funded by the city.

During the two-month campaign, 220 people went on at least one bike ride. Each participant cycled on average 97 kilometres and all together 20,476 kilometres were cycled. According to the campaign evaluation, 33% of the respondents said they had cycled ‘more’ or ‘much more’ during the campaign than they normally do. The campaign didn’t reach its ambitious goal of 1000 cyclists; however, ‘Cykelstafetten’ did reach its other goal, namely to create a program for adults based on GPS technology.

The primary challenge lay in recruiting participants to take over the GPS. The evaluation showed that 30% had difficulties finding a new person to take it over. One way to solve this problem could be to prolong the recruiting process in future so that captains could find team members in advance. This would make it easier for individual participants. But, on the other hand, this would reduce the use of people’s own networks, which was one of the innovative aspects of the campaign. In future the use of Facebook in promoting and organising the campaign will be considered.

Despite some challenges, the first year allowed the concept to be tested, and the experiences and evaluation of the first ‘Bike Relay Race’ have laid the ground for a continuation and development of a more consistent campaign in the coming years. The campaign will be repeated in 2013.