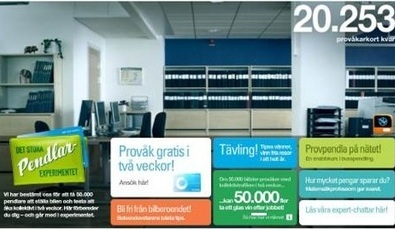 In 2010 Västtrafik launched a public campaign called The Big Commuter Experiment" which was their largest campaign ever. Motorists were offered a free two-week ticket on public transport. Car owners received information in a letter sent to their homes. The letter was combined with a public campaign in newspapers, on billboards and on a dedicated campaign site on the internet. 50133 motorists applied for the free ticket, 27498 of whom met the criteria and they all received a two-week public transport ticket in the post.

In 2010 Västtrafik launched a public campaign called "The Big Commuter Experiment" which was their largest campaign ever. The aim was to attract new travellers and the campaign was part of an effort to double the number of journeys made using public transport in Västra Götaland by 2025. Another aim was to lower the threshold for public transport.

The campaign lasted from September 27th to October 20th 2010 and targeted car commuters in the region. Car owners received information in a letter sent to their homes. The campaign also appeared in newspaper advertisements, on posters at bus stops and on billboards. A dedicated campaign site on the internet enabled people to calculate how much money they could save by leaving their car at home. The site also enabled users to chat with experts or ask a psychologist why it is so difficult to change travel habits.

Car owners who expressed an interest in accessing public transport, and who met the criteria, received a free two-week ticket via the post. Eligiblity was restricted if the individual was already a customer or had received a free ticket during the previous year.

50133 motorists applied for the free ticket and 27498 of them met the criteria. The eligible motorists received a two-week public transport ticket through the post.>If all 27498 travellers left the car at home for two weeks they saved approximately 2000 tonnes of carbon dioxide emissions. This would also provide an area equivalent to 43 football fields of extra parking space every day.

Based on previous experiences, Västtrafik estimated that approximately 20% of those receiving the free tickets would become regular customers. If the figure of 20% was reflected in this campaign it would mean 5500 new public transport users. These travellers would generate approximately 2.2 million new partial journeys in a year. The test travellers were most numerous in Göteborg, where 5779 people received a bright green card. Partille residents were second-best represented, with 2138 individuals.

Facts:
What if 27500 travelers leave their cars and use public transport?

(The calculation example was developed by Sweco in August 2010, based on the fact that the average commuting distance is 20 kilometres. Fuel consumption was calculated using a Volvo V70 2.4 model year 2000, which uses 8.6 litres per 100 kilometres and a petrol price of 12.69 SEK per litre).