Skip to main content
Home Discover Case Studies Go to school on foot. by cycle or by bus in Udine/ Italy

Go to school on foot. by cycle or by bus in Udine/ Italy 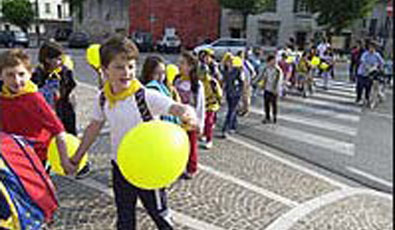 In 1996 the WHO Healthy Cities" project started a school mobility project in order to motivate children in Udine go to school on foot, by cycle or by public transport instead of being brought by their parents in private cars. Thereby the children's autonomy and their physical activity should be increased. Furthermore the project leaders wanted to reach a decrease in air pollution and a reduction of the risk of disease deriving from polluting agents.

The problem is often that parents are worried about their children and prefer to drive them to school with their cars. They are scared that the schoolbags are too heavy or of course that their children get injured in the road traffic. This is why the campaign focuses on road safety, health for all, physical activity, autonomy and socialization opportunities for children. In order to implement these goals the streets, bus routes and pavements have to be improved and the policemen need help in supervising the children.

All in all in Udine there are 45 primary and middle schools. Out of these, pupils are motivated to go to school four days per month on foot, by bike or by bus in the framework of a competition. Each class receives a poster on which the students have to make a sign if they have walked, cycled or taken the bus to school. The three classes with the highest number of " active" children are awarded by a prize.>To make it easier for the children to use public transport the bus corporation S.A.F. set up new routes and timetables and the police helped to make the school routes safer for children.

At the end 72% of the whole school population in Udine participated in the campaign. A survey within the students and their parents showed that after the project the children preferred to walk, cycle or take the bus to school. Because the parents were also involved in the school mobility committee and in accompanying the children on the routes they were later convinced of the benefits of the project.
After 1996 there was a network of safe routes build up not only for students but also for the rest of the population. Therefore the municipality has again improved the infrastructure of the city (e.g. elevated crossing, narrowing of the roads near pedestrian crossings, areas with speed reductions, linking of cycle tracks, enlargement of public parks and open spaces)
The experiences of the project have also shown that the campaign can easily be transferred to other cities.

Information taken from the " Collaboration between the Health and Transport Sectors in promotion Physical Activity:Example from European Countries