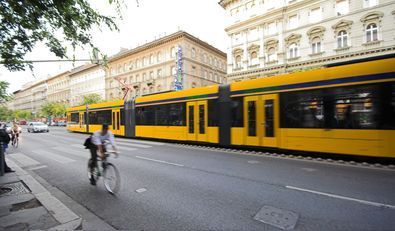 More than half a million passengers have been enjoying faster and more regular tram services since February 2012 as a result of a new public transport initiative led by the Centre for Budapest Transport (BKK).

Traffic lights along central Budapest’s outer ring road (Nagykörút) have been adjusted to give priority to trams, cutting journey times on lines 4 and 6 by two to three minutes. The project budget of EUR 148,000 was 90 percent co-financed by the European Union. As part of the efforts to improve the attractiveness of public transport and encourage a shift away from individual vehicles, trams have also been running more frequently since February - up from 28 to 30 trams per hour in peak periods which equates to a seven percent growth in capacity.

The Municipality of Budapest initiative was implemented by BKK in order to cater for rising numbers of public transport passengers (already between 7,000 and 8,000 in peak hours compared to 3,000 individual vehicles). On-site modifications were completed in November 2011 and the new system was made fully operational, with updated schedules, after a comprehensive test run on February 12, 2012.

Prior to the project, trams were unable to maintain optimal speed and frequency due to car-friendly traffic light sequencing, which resulted in delays on the tramlines. As a result of the project, traffic lights have been adjusted in favour of trams on the heavily used lines running along the city centre’s outer ring road. A total of 52 traffic lights were adjusted and developments were undertaken at 16 major junctions. Traffic lights at a further 68 junctions were reprogrammed to support 60-second intervals between trams (rather than the earlier 90-second intervals) and to cut journey times from 32 minutes to between 28 and 30. A new radar-based tracking and signal system has also been introduced to monitor accurate departure times from tram stops. Minor adjustments have also been made to road layouts.

Due to the aforementioned developments, tram passengers can now reach their destination quicker and trams are more frequent, without traffic jams on the railways.
The prioritisation of the public transport system is a critical issue in Budapest, where several similar projects are currently being implemented. Measures such as introducing priority bus lanes, improving major junctions and allowing buses access to segregated tramlines will all make a much-needed contribution to sustainable mobility in Hungary’s capital city.