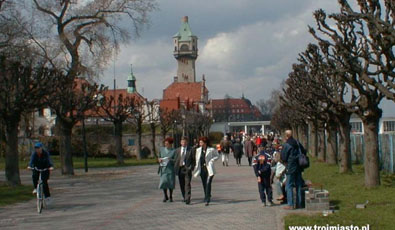 The Gda?sk project is the first complex cycling activity of local government in Poland. The user- and quality-oriented project was supported by Global Environment Facility (GEF).

Gda?sk cycling and ecologist community is perhaps the most vibrant in Poland. As a result Gda?sk was the first city in Poland to have the Cycling Task Force. In Gda?sk took place the biggest cyclist demonstrations in Poland which attracted more than thousand people. It impressed local politicians.

In 1999, the Mayor set up a team to investigate whether cycling infrastructure could be possibly funded under EU programs. This was exactly when GEF announced its Operational Program 11 - mitigating climate change induced by transport. City council and NGO’s (OLE - Citizens’ Ecological League, and PKE - Polish Ecological Club) decided to apply for GEF.

The long term goal is to increase bicycle use in Gda?sk to 5-10% of all trips (on the begin of the project was near 1-2%) and in this way, control the motorized transport induced emissions of greenhouse gases by 250,000 tons during 10 years, after the end of the project.

The>main goal 5-10% figure was establish in comparison with the cycling levels in cities in southern Sweden, just across the Baltic Sea and it was as well a result of the polls commissioned in 1999 and 2000 by the PKE from polling and market research companies. Most people interviewed quote lack of cycling facilities as primary reason they do not cycle.

The total budget of the project was 2,6 USD, including 1 million USD grant from GEF, 1,56 million USD contribution by the Municipality and 27 587 USD input by the PKE - a grant of The National Fund for Environmental Protection and Water Management.

Instead of initially planned two year implementation period, the project lasted for four years (2002-2006). Instead of 30,7 kilometers of segregated bicycle tracks, only 17 kilometers were built (main reason was the increase of construction works prices). But the most questionable was the traffic calming.

The estimated level of bicycle use in Gda?sk after the project was about 3-4%. It is the highest rate in Polish big cites. The role of bicycle in Gda?sk still has been growing up.

The constructions supported by GEF probably would be followed by new project. Gda?sk in co-operation with other two municipalities of Tricity (Sopot and Gdynia) in 2006 prepared a proposal for new project of cycling infrastructure development. Now founded by the EU. Estimated cost of 130 km bicycleways in Tricity is about 100 millions PLN (about 26,5 millions EUR).