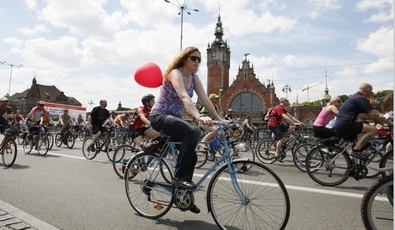 In 2010 the municipality of Gda?sk, the sixth largest city in Poland, introduced its leading project to promote cycling. Changes to traffic in the city centre have led to increased possibilities for the mobility of pedestrians and cyclists.

Within the project “Gda?sk Bicycle City Centre”, a number of actions to encourage the use of bicycles were implemented in the centre and the Old Town of Gda?sk. Although promoting cycling in the city was the main aim of the project, additional objectives include traffic-calming, enhancing safety, and improving air quality. These actions, the first of their kind in Gda?sk, follow intense information campaigns involving almost all local (and some international) radio stations, web sites and newspapers. A flyer for the inhabitants of Gda?sk, explaining the aims of the project and actions implemented, was also published.

The most important change to the traffic system of Gda?sk’s central district is the introduction of a speed limit of 30 km/h. The new limit was introduced for all streets in the centre  and Old Town. However, this change was not intended to reduce the average speed of traffic, which was already lower than 30 km/h, but rather to reduce the distances between cars, thus relieving traffic jams.

In the very centre of the Gda?sk’s Old Town almost all junctions have become uncontrolled intersections. The aim was to give responsibility for traffic safety back to traffic participants, not just on minor roads but also on main ones.

Surface markings were removed from many pedestrians crossings in the zone on the premise that the pedestrian flow should not be limited to fixed points.>All one-way and “no entry” streets were made accessible for cyclists in both directions. Some streets were equipped with entrance and exit gates.

Furthermore, about one hundred road signs were removed. It was believed that that the historic area itself should fulfil the warning function for drivers to behave carefully. However, signs were installed at the junction areas on the edge of the zone to inform all road users of the changed traffic order. This has become standard practice for similar ventures in the municipality of Gda?sk.

Traffic order changes in the centre and the Old Town of Gda?sk have reached the intended effect of changing the flow of traffic. Pedestrians and cyclists have achieved a high level of mobility so that they now dominate the city centre, while car drivers have become 'guests'.

Contrary to common expectations, the new speed limit did not result in low traffic capacity in the Old Town. A secondary success of the undertaking is the regained beauty of the Old Town, with the removal of more than a hundred road signs.

Some of the traffic undertakings implemented in the Old Town have been recognised as successful and thus transferred to other roads in Gda?sk. For example, several housing associations in the city have fixed the speed limit to 30 km/h on local streets and implemented the unified marking system from the uncontrolled junctions of Gda?sk.