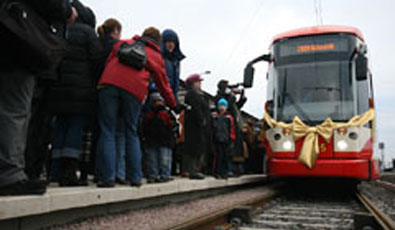 A tram line to the district in Gdansk called Chelm is a result of public opinion’s mobilization and successful cooperation of the city and national authorities.

Agnieszka Pomaska, a young councilor from Platforma Obywatelska (Civic Platform) mobilized inhabitants and politicians to realize a tram investment, planned from over twenty five years. Nobody believed that it could become a success. ‘When in 2003 I organized putting signatures to a project of tram line to Chelm constructing, not many people believed in realization of this, again refreshed, idea. Local politicians commented this initiative as an activation just for gaining new supporters’ - writes councilor Pomarska in her blog.

The route is 2,9 km long (5,8 km of single track). There are 4 stops along the way, all with anti-collision accesses to platforms. Access for people with disabilities and for mothers with baby carriages is made easier by special lifts. Along with the investment, a center of remote control and rectifier station has arisen there.

Thanks to the new line the time of a journey by public transport from Chelm to a city center has been shortened from about 30 minutes to less than 10 minutes.

Passengers travel to Chelm in newly-purchased Bombardier Flexity Classic NGT6-2GD trams or older Düwag N8C trams. Due to a grade of 5% or more, usage of the popular Konstal 105N is impossible. As new vehicles are purchased it is hoped that the operating frequency in rush hours will rise to every 5 minutes.

The time limit of the investment’s realization was very short: from September 2006 to December 2007, because the project was realized within the confines of 6 Frame Program and it had to be accounted by the end of December. The finance investment came from unexploited financial resources for public transport in Poland - it was brought to realization almost at the last moment, just before money would have to go back to Brussels. Good cooperation of the city council and central authorities allowed the project to finish on-time.

This was the largest tram investment in Gdansk for 30 years, and its success is due to the commitment of ayoung councilor, who was able to convince public opinion, other councilors and the president of the city to build the new tram line. We are thankful for the good cooperation and commitment of everybody finishing everything despite very short time limits. The new line is the beginning of tram investments in the south quarters of Gdansk. With the success of this tram line, inhabitants are demanding a continuation of the tram network’s development.