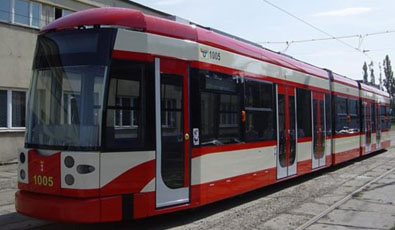 With sustainable transport high on Gdansk’s agenda, the city has made public transport one of its development priorities.Launched by the City of Gdansk in 1996, the Gdansk City Transport Project (GCTP) is designed to develop public transport services in the city and the entire conurbation.

Situated on a narrow lowland stretch between the Bay of Gdansk and a range of hills, Gdansk is the Tri-City metropolis’ biggest city. With its “lower terrace” now fully occupied, the city’s development is shifting towards its “upper terrace”. The differences in elevation between the terraces are as high as 80 - 100 m, making transport a difficult task, especially because the sections of varying heights are relatively short.

The objective of the GCTP is to significantly improve Gdansk’s public transport services primarily by modernising and developing trams, an environment friendly and sustainable form of transport. Tram systems will help reduce city centre congestion, the result of a dynamic increase in car travel, economic growth and public transport. City streets and roads were not designed to accommodate such volumes of cars and buses, the most popular mode of public transport.

The project is supported by the European Bank for Reconstruction and Development, which sponsored some of the studies using PHARE funds and approved loans for the City for infrastructure development and fleet.

Between 2002 - 2003 improvements were made to tram tracks and tram traction systems along a 29.143 km long route and at several junctions. The project value was PLN 22.5 M gross with additional funding to purchase 33 buses and improve 7 tram cars amounting to the total of PLN 35.6 M gross.

The project will deliver a smooth, efficient, safe and convenient transport link for a target group of the Tri-City population and tourists. Through the project the City will be able to turn around the declining quality and quantity of public transport, improve the services and reduce the environmental and social impacts caused by transport. The benefits will include an improved urban environment, especially in the historic centre, better access and shorter travel time.

Launched in 2006, phase two of the Gdansk City Transport Project (GCTP) is designed to:


However the phase 2 has come to the end and the third phase was started in 2009, its completion is scheduled for 2012. This also includes modernization of existing lines and construction of new ones.