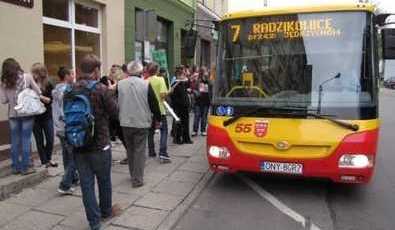 In May 2012 the authorities of Nysa in south Poland introduced free city bus rides for all passengers who can present a driver’s license and car registration document when boarding buses.

Nysa is a city in south Poland with over 40,000 inhabitants (58,000 in the municipality) and 16 bus lines (12 go out of the city). The public transport company in Nysa, MZK, carries 2.6 million passengers every year. Since 2006, the bus fleet of Nysa MZK has been systematically upgraded with nine new buses in 2010 and two in 2011. It now consists of 34 buses in total.

In order to contribute to the protection of the environment, to increase the number of passengers, and to restrict the access of individual traffic to the congested city centre, the council of Nysa decided to allow all passengers (not only local residents but also tourists and guests) who hold driver’s license and car registration document to make use of public buses free of charge.

Another reason for the measure is the temporary closure for repairs of the Kosciuszko Bridge, one of two bridges in the city essential for a steady traffic flow, although this inititative for drivers will stay in force after the bridge repairs are complete.

Free bus rides for car drivers was initiated by Nysa’s Mayor, who prepared the relevant resolution, and approved by the City Council on 19 April 2012. This resolution was then published in the Official Journal of the Opole Province. It was assumed that one person in a car uses five times as much space as in the bus and ten times as much as on the bicycle. In addition, no loss in earnings was expected, as the car drivers did not buy tickets anyway.

To inform the public about the scheme, the council used billboard advertising at four road entries around the city, and posters on buses and in the community.>The advertising motto says that collective public transport is the most friendly form of urban transport to humans and the environment.

In 2010 the municipality of Nysa purchased 7 new buses, obtaining funding from the European Union European Regional Development Fund. The purchase price was equivalent to over €1.1 million, with the community’s own contribution of 15%. Thus, the buses in Nysa became modern, comfortable and low-emission vehicles.

Between 26 May to 18 June 2012, the Municipal Department of Communications in Nysa conducted the first survey on the use of city buses. The study took place on 14 days, including 4 Saturdays and 2 holidays. At that time, 12,124 people were checked. It was surprising that as many as 451 passengers took advantage of the free rides, among them 160 people who have not benefited from public transport so far. The others have paid the standard fare.

According to the office of Nysa, after the regulation was introduced, the number of passengers increased by an average of 79 persons per day. In other words, 79 cars did not pollute the environment of Nysa daily. Furthermore, free bus travelling has become increasingly popular and, according to studies, the reduced traffic has been noticeable, especially on weekends.

One of the reasons for the initiative’s success is the range of the public transport; besides the city, the buses serve 26 villages around Nysa. However, in view of the population size of the region, it is difficult for the Nysa Office to say whether the free bus solution can be applied in bigger agglomerations with the same level of success as in Nysa.