Free guarded cycle parking in the city of Groningen (the Netherlands) 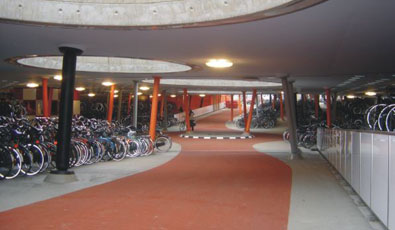 Being confronted with a large number of bicycles near the Groningen railway station, the local government introduced its bicycle parking City Balcony" ("Stadsbalkon" in Dutch). Its realisation, organisation and use are designated as a classic example of cycle parking in the Netherlands.

In 2001, after handling the traffic routes and bus station, the city wanted

Being confronted with large amounts of bicycles near the Groningen railway station, the city of Groningen introduced in 2006 its bicycle parking "City Balcony" (or "Stadsbalkon" in Dutch).

"City Balcony" is a large covered space located below the square in front of the Groningen railway station where bicycles can be stored at two levels. The project costs were estimated up to 10 million euro’s. The project started in autumn 2006 and was finalised in January 2007.

Visitors and inhabitants of the city feel more comfortable and secure using their bicycle for their daily trips as they know they can store their (sometimes expensive) bike safely.

The cycle parking proves to be a huge success:

You Tube video on "City Balcony"