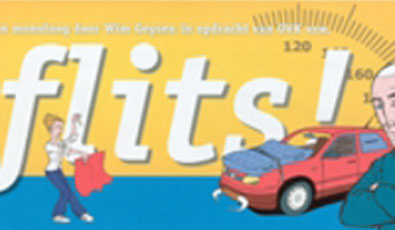 Actor Wim Geysen travels across Flanders with his theatrical monologue ‘Flits!’ (‘Flash!’), by which he attempts to alert young people to the problem of weekend traffic accidents.

In 2001, OVK (Ouders van Verongelukte Kinderen vzw - an organisation of parents who had lost children in traffic accidents) asked actor Wim Geysen to cooperate on a sensitization campaign about traffic safety in general and about accidents in which young people are involved in particular. In Belgium, 33% of the drivers involved in serious traffic accidents during weekend nights are young people between 18 to 24 years old. Since too didactical campaigns often overshoot the mark, Geysen and OVK have opted for a modern approach which fits in with young people’s social environment. The cooperation resulted in ‘Flits!’, a theatrical monologue that seeks to alert young people as well as adults to the risks and consequences of weekend traffic accidents.

In ‘Flits!’, Geysen tells the story of a group of friends who are out on the razzle on Friday night. Like many young people, they spent their night laughing, dancing, drinking and having fun. When returning home, they engage in a street racing game which ends in a fatal car accident. The monologue ends with one of the passengers’ funeral.

While Geysen performs his monologue, images of young actors playing the events of the story are projected on a large screen. A party setting is evoked by using these projection images - which are filmed in a music video style - combined with loud music and disco lights on the stage.>Since the evoked atmosphere fits in very well with young people’s social environment, they are more inclined to absorb the monologue’s message than they would be when being confronted with overtly didactical campaigns.

According to Geysen, ‘Flits!’ can be a relevant starting point for discussing traffic safety. For this reason, he has developed - together with OVK and other partners - a documentation file that can be used for subsequent discussion. He has also written a book ‘Zonder Afscheid’ (2004 - ‘no goodbye’), which is based on testimonies of parents, brothers and sisters of young road victims.

Because of its moving story line, powerful message, modern style and accurate depiction of youth culture, the monologue has brought about a lot of positive reactions from both the target audience and the press.

Since 2002, Geysen has performed ‘Flits!’ more than 250 times in schools and arts centres across Flanders. In 2007, a DVD of the monologue has been released. Most important: the monologue has proven to bring silence amongst the toughest crowds, and to make the audience reflect on the issue at hand.