The first line of the Warsaw Metro completed 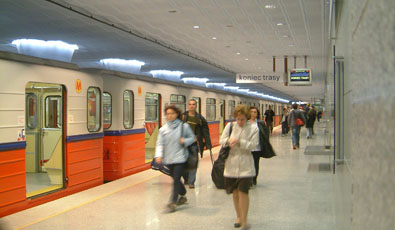 Warsaw used to be a member of the small club of European capitals without an underground railway system. The Warsaw Metro was one of the lasting investments in Polish local public transport. There were many government attempts to start the construction works, and the final decision was made in 1983.

The first section of the Warsaw Metro (11 stations) was opened in 1995. Then successive next stations had been put to use, but the work accelerated with the arrival of EU co-funding.

The Warsaw metro consists of a single north-south line that links central Warsaw with its densely populated Southern and Northern residential areas, mostly block-of-flats settlements from the communistic times. The line's total length is 23,1 km. There are 21 stations. At a later stage two more stations may be added.

The underground rail is operated by the communal company Metro Warszawskie Ltd. Total costs are estimated at 3,5 billion PLN (ca. 1 billion EUR). The city has a plan to build a second and a third line. They will connect the right-bank districts with the city centre.

The station “Plac Wilsona” was prized during Metrorail Conference in Copenhagen as the most beautiful station in the world.

Although the Warsaw Metro does not play a dominant role in modal share - in 2005 it was below 5% of whole trips, it is difficult to imagine Warsaw public transport without an underground rail. Regardless of mobility improvement, the main success of Metro is the fact that this means of transport has broken a Polish stereotype, that public transport is for people who cannot afford for a private car.

There is ongoing construction of the second Metro line in Warsaw that is set to be finished in 2013.The length of the line will be 6.1 km with 7 stations.