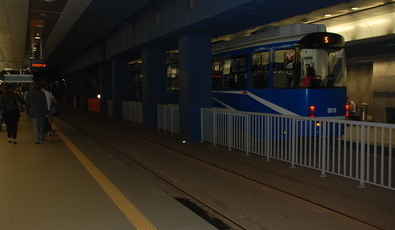 In 2008 the Krakow Fast Tram began operating in a tunnel under the city centre. The construction of the tunnel began over thirty years ago as part of an underground transportation system in the city. However, it has become a premetro, linking Krakow city with its main railway station.

In 1974 the municipality of Krakow, the former capital of Poland, started to invest in an underground transportation system. However, the economic crisis and system changes resulted in the withdrawl of investment and many others in city transportation.

The metro project was abandoned for the development of an underground rapid tram. Several times the project has been stopped and resumed, but finally in December 2008, the tunnel opened for trams. It has a total length of about 1,400 metres and includes two stations: Central Railway Station and Institute of Technology Station.

The Krakow Fast Tram tunnel was initially planned to be a much longer section connecting the city centre with the easternmost industrial district of Krakow. Construction work started on a 180 metre tunnel section under the modernised Krakow railway junction. It was assumed that the tunnel would have an east-west course. In the place of the present Krakow railway station a Krakow Transport Centre was originally planned.

After many ups and downs associated with changes to the political system, it was finally decided in 1991 that the tunnel would become a part of the Krakow Fast Tram system and not a subway. The section running beneath the railway station was completed with many changes to the initial design, including the tunnel running in a north-south direction.

The investment was stopped again and then resumed for the third and last time in 2004.>A series of other projects such as the building of the Regional Bus Station and the shopping centre around and over the tunnel began. Therefore, the idea of further extending the tunnel to the City Centre was abandoned and no additional space for further outlets was kept. The first test ride was launched in 2008, 34 years after the start of the project.

Due to a long construction period and changes in building techniques and regulations, the tunnel sections differ from each other. While the tram lanes of the older part (until the first of two stops) are in one large chamber, they run separately in the newest section.

Both stops were adjusted to low-floor trams and to meet the needs of people with disabilities. Passengers can use escalators and elevators to access the platforms. The stations also operate an electronic passenger information system identical to that operating on the rest of the Fast Tram route. Although the tunnel construction is designed for speeds of up to 60 km/h, the tram moves with limited speed of 30 km/h. In the future, with the launch of a new system of traffic (with emergency self-braking) the limit will be abolished.

Generally, the municipality of Krakow is opposed to the construction of a traditional underground, arguing that such an investment is too expensive and the maintenance costs would be too high for Krakow with its population of around 755,000; to build one kilometre of underground costs about €75 million.