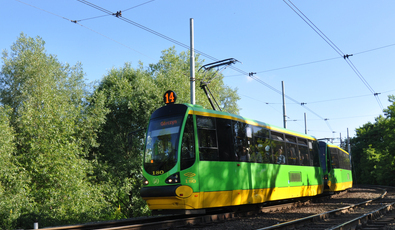 In 1997 the municipality of Poznan in west Poland opened the first rapid tram route in Poland. The success of project has served to encourage other Polish cities to build similar collision-free rapid routes.

The concept of the Poznan Fast Tram (PST - Poznanski Szybki Tramwaj) first appeared before the Second World War but it was not until 1974 that the city spatial development plan defined it as the most economically efficient transport solution.
The preparatory phase began in 1980, and the construction two years later. The original design specified that the PST would have a total length 27 km and link the city’s main railway station with four districts.

The route is 6.1 km long. 66% of the route length runs in a trench 6 meters deep. Due to the specific course of the route, it was necessary to develop a special emergency system and to purchase specialised technical rescue equipment. 20 above-ground engineering structures, such as flyovers and footbridges, were built along the track. All platforms are 96 meters long and monitored with CCTV.

Tram lines on the route run every 10 minutes, which means in practice that trains arrive every 2.5 minutes. Currently, there are 32 trains on four tram lines operating on the track. One night line is supported by two trams with an internal monitoring system. Fourteen modern 100 percent low-floor and ten modern 70 percent low-floor trams have been purchased specifically to serve the route.

The rails are mounted on wooden sleepers with a classic screw attachment.>However, due to an extensive wear, the management of the PST will soon change the system of fixing rails to the sleepers. Instead of screws, more modern elastic grippers will be used. This activity will not only improve the comfort of the journey for passengers, but also reduce noise emissions caused by trams.

According to economic calculations, the total cost of the investment, considering the rate of inflation, has amounted to the equivalent of about €50 million.

The construction of the PST took 15 years but resulted in the most modern rapid tram route in Poland. Such collision-free transportation was later constructed in only a few large cities in Poland. These include, for example, the underground system of Warsaw and the fast tram in Krakow. Other cities are planning similar systems, motivated by the success of the Poznan tram route.

The collision-free course of the track allows the PST trams to achieve a much higher level of punctuality than other city tram lines. The travelling speed of the PST (without stops) is approximately 34.9 km/h. In comparison, the average speed of the other tram lines in Poznan is 17.7 km/h.

The fast tram in Poznan has ensured efficient and fast transportation for more than 70,000 people living in the immediate vicinity. The PST can move about 6,000 inhabitants per hour within about 777 courses a day and 24 at night. In the longer term, the municipality anticipates introducing further new rolling stock onto the track.