Familiarising older people with public transport in Breda (The Netherlands) 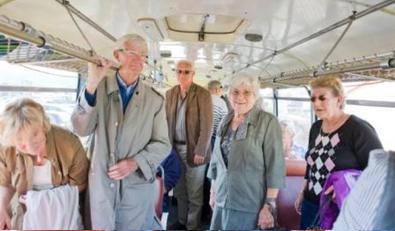 The PT (Public Transport) ambassadors ('OV ambassadeurs' in Dutch) is a project of the Province of Zeeland which forms part of a series of 10 to 12 pilot projects to improve public transport in this rural region. The objectives are to make older people familiar with public transport and increase patronage, but also to prevent people from becoming inactive and isolated.

Zeeland suffers negative demographic growth. Retired people stay while younger people move towards larger conurbations. Therefore activities for older people have been included in the pilot projects. Two main issues have been identified. First, older people are no longer familiar with public transport. Second, older people tend to become inactive and stay at home, particularly when driving a car becomes more difficult. Due to the large distances to shops, medical services and friends in the rural province, the impacts of reduced ability to drive are stronger than in cities.

Thus the objectives are to make older people familiar with PT and increase patronage, but also to prevent people from becoming inactive and isolated. The project started in November 2009 and has been fully operational since October 2010. The ambassadors aim to familiarise older people with public transport by helping them to learn how to use public transport - most importantly, in a positive, enjoyable way.

A short qualitative survey was carried out beforehand in order to understand the needs and expectations of the target group.

In the first step, the ambassadors were recruited. This happened via newspaper advertisements (particularly in the free weekly newspapers), word-of-mouth advertising, multipliers such as social clubs/associations and PT operators. Ambassadors were required to be at least 55 years old since the initiators were convinced that older people learn best from their peers.

The ambassadors received one day of training in small groups (10-15 people), which included tips and tricks on how to use PT, and information about the tariff system, schedules and network. Safety aspects played a minor role. An additional training day on e-ticketing was added afterwards as since the end of 2010 electronic ticketing was introduced (paper tickets were no longer available). Older people had difficulties in handling e-tickets, and its abstractness challenged them further. This was a main reason to introduce the ambassador scheme, however it turned out that the trainers/ambassadors were challenged by e-ticketing themselves.

The third step was making the ambassadors known to the public. This was done by a campaign using the channels mentioned above, including posters and leaflets at public libraries, etc. Ambassadors were 'inaugurated' by the Deputy for Transport in Zeeland, under the eyes of the local/regional press. Furthermore, a large public event for older people took place. More than 200 seniors were brought to the event by historic, vintage buses, where they learned about the ambassadors and PT in general. Afterwards, they used modern PT vehicles to get home.

In the next stage, the actual PT ambassadors became active. Upon request, they organised test rides with individuals or groups of older people. The trainees could suggest a destination or the ambassador would plan the trip. The trip aimed at familiarising the trainees with PT, but also provided them with a positive experience. The idea was that this would motivate them to try it again. The PT ambassadors further gave short presentations at older people’s clubs, etc.

All activities were evaluated; the mobility days by questionnaire, and the training sessions by telephone interviews with trainees. At the time of writing (May 2011), no detailed evaluation results (e.g. shifts in modal split) were available. However, the scheme was very well accepted among older people (trainees) and the ambassadors were very enthusiastic about it.

The preparation took more than one year (planning, preparing material, recruiting and training the ambassadors, making the scheme known, etc.). Before that, there was a 6-month planning/tendering process on the province’s side. Funding came from the Province of Zeeland. The ambassadors were reimbursed for their costs, but received no further financial support.

The scheme is suitable for all sizes of cities, also for rural areas. Many older people don’t know how to use PT properly and run the risk of dependence when driving a car becomes more difficult. There is a high need to provide information among older people (but they might not want to admit it). It is recommended to do a user-needs survey beforehand, even if cities are only interviewing a handful of older people. Organisations with direct contact to potential ambassadors might help with recruitment. Once they are on side, they will be very motivated and want to help other older people.

In the future, an 'anchorman' or 'role model' should boost the campaign, such as a politician or well-known person, who will be the face of the campaign. It is hoped that the project will be established permanently, however with less effort. The idea is that it less support is needed and a volunteer organisation will manage the scheme.