External battery-charging and -changing of electric vehicles in Denmark 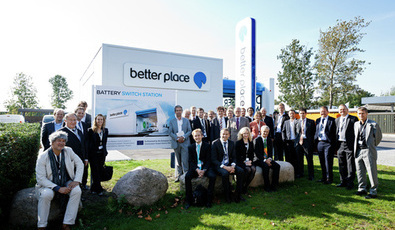 In 2011, the private company Better Places began developing battery-changing" stations to provide more options to use renewable energy in electric vehicles throughout Europe. The company already opened multiple stations in Denmark and recently teamed up with the Danish State Railway Company to promote “battery-changing” options for those using railways.

Although electric battery-powered vehicles have made large strides in development over the past few years, they still suffer from limitations of battery life. Many vehicles need to be recharged after one or two days of use, and most electric vehicles are unable to travel long-distances, especially when commuting to urban centers and traveling from one urban area to another.

Further, cars have limited options for re-charging. The process itself takes 6-8 hours, limiting drivers to using home-based sources of energy (or private/public sources, if living in urban centers), which often occurs overnight. The charging process thus must make use of the main available energy source, which is often the main electricity grid of the urban area. This can often be non-renewable, especially in regards to night-time recharging.

The concept of "battery-changing", where the battery inside a vehicle is physically taken out and replaced by another one, is thus an innovative way to promote and make use of renewable energy sources in electric vehicles. It also saves time (5-10 minutes for a "switch" versus 6-8 hours for recharging) and makes electric vehicles and renewable sources of energy a more attractive option for those using a car for part or all of their travel means.

Better Place, an organization based out of California, in the USA, has developed the concept of "battery-changing stations", where vehicles can have their current car batteries switched out for freshly charged batteries. The empty batteries are then refilled with energy. This charging can further be timed and organized to make optimal use of renewable sources of energy, such as wind and solar power.

"The battery switch experience is a simple, fully-automated process. ... Customers simply swipe their membership card, which authenticates the car and subscription via the Operations Center to activate the switch. The rest of the process is automated, similar to going through a car wash, so the driver never has to leave the car. In just a few minutes, a robotic arm removes the depleted battery and replaces it with a full one and the driver is back on the road." (see Business Wire, June 2011)

In 2010, the European Commission gave "its green light" to a project entitled "Greening European Transport Infrastructure for Electric Vehicles", involving over 5 million Euros of EU funds and six countries including Denmark.>At the center of this project is the initial funding to develop the availability of charging infrastructure for electric vehicles throughout the EU over the following 10 years.

In June 2011, the first Battery Switch station in Europe opened up just outside of Copenhagen, Denmark. Over 3,000 visitors had expressed interest before the opening and many have considered buying an electric vehicle after visiting the battery changing station. It is the first of 20 planned to open in Denmark by March 2012.

In August, Better Place signed an agreement with the Danish State Railway Company to further develop their concept in line with rail transport. At the signing, "DSB presented how the electric car can be booked online together with the train ticket and how an SMS code will be sent to the employee during the trip and by answering this upon arrival, will open the electric car at the station. From the station, the employee then enjoys up to 120 kilometers of driving to one or more meetings before connecting the car to a Better Place charge spot at the station and heading back home with the intercity train." (see Better Place Europe)

In the US, the state of Hawaii is developing in a similar fashion to Denmark. The state plans to have multiple stations up and running in 2012. The islands, paying over $7 million in import fees per year to ship oil, are actively searching for greener options of transport.

The private-public partnership between local and national governments and the US-based company Better Place is still in its "experimentation phase" and will at least partially depend on successes of stations in Denmark and Hawaii and forging strong partnerships with many key stakeholders in transport.

The concept of battery-changing is an innovative way to develop methods for fuelling electric vehicles with more renewable sources of energy. Through the concept of "battery-switching", batteries have the freedom to be fuelled and stored whenever conditions are best to make use of renewable energy sources.

Such innovation could be further extended to electric forms of collective-passenger transport and car-sharing and car-pooling systems in European urban areas in the future.

See "Car Battery Charging Stations Coming to Hawaii and Your State?” for more information on the project.

Further information on developments in Denmark can be found here.