Expansion of the low-car-traffic zone in Mechelen (Belgium) 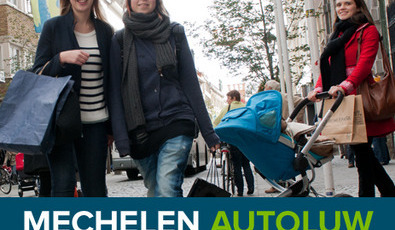 The existing car-free area in Mechelen has recently been expanded. Cameras with number plate recognition capability monitor compliance within the area. The car-free centre makes the city even more attractive for the Malinois to live, for customers to shop and for tourists to visit.

Mechelen is a Flemish city with a population of 80,000. The city lies on the major urban and industrial Brussels-Antwerp axis, about 25km from each city. The city also hosts an important rail hub that provides immediate access to both the railway and bus networks with urban and several regional lines.

In recent years the city invested heavily in order to create a city with room for everyone. Research showed that on average 20 to 30% of car traffic in the city was cut-through traffic - traffic that does not belong there and that also creates a lot of inconvenience and insecurity on the roads. Non-intervention would mean that, within a few years, traffic in the center of Mechelen would become oversaturated. To avoid this impending gridlock it was decided to expand the car-free area and to change the traffic circulation plan. The desired result: a liveable and accessible city for residents, traders and visitors.

Mechelen was one of the first cities to turn its city centre into a 30km/h zone. Many other cities followed suit. Large urban renewal projects attracted new families to the city. Several streets and squares have been redeveloped as pleasant spots with additional space for pedestrians and cyclists. A portion of downtown Mechelen has since been low-traffic, namely Bruul (from Haze Street) and also a number of streets in the central shopping area and the Fish Market.

The pedestrian precinct was recently expanded. The new circulation plan also extends the car-free area with five additional residential streets and their side streets. The entire car-free zone is car-free every day between 11am and 6pm. In practice this means that the area is always accessible for pedestrians and cyclists. Motorised vehicles (cars, motorbikes...) are not permitted between the restricted hours. Public transport, buses, taxis and permit holders are allowed in the zone, also between the restricted hours. Residents of the car-free zone, but also certain professions such as medical care providers are entitled to a licence. Loading and unloading can only take place from 6pm to 11am. during the remaining hours the centre is fully accessible to everyone. This excludes areas where no cars were allowed before the new phase began.

To exclude unwanted traffic from the centre, a strap system divides the city into different parts. Continuous movements through the city are therefore very difficult or impossible. Depending on your destination you must choose the right approach road. Criss-cross driving through downtown looking for parking is impossible.

Monitoring of the car-free area is carried out by cameras with number plate recognition: 9 cameras define the car-restricted area including 4 at the entrance of residential streets. Another 2 cameras overview the permanent closures and a new transit. The circulation plan also shows the location of these cameras. Motorised vehicles can only enter here between 11am and 6pm if they are licensed. If you drive through an area without a valid certificate you receive a traffic fine of 50 euros. The permits must be requested in advance. When the cameras recognise license plates and then confirm the car as licensed, in these cases there is no fine.

Low-car-traffic does not equate to inaccessibility. All car parks in Mechelen remain permanently accessible. The underground parking in downtown is still available for everyone through the city loops. The dynamic parking guidance system is adapted to the new traffic circulation so that cars from the ringway are efficiently guided to the nearest car park in the centre or periphery. The different neighbourhoods however are spared from cut-through traffic and yet remain accessible to local traffic. A healthy balance between accessibility and liveability is the aim.

In February 2012 the city could report that the expansion of the car-restricted area was paying off. Since December 2011 remarkably fewer vehicles have been driving in the city. Yet violations have still occurred. To reduce the number of offenders, additional signage was used. At each camera pole a big sign reminds the driver of the car-free area and that, without a license, one risks a fine.

In July 2012 the final piece came into force with a measure that should eliminate cut-through traffic from the downtown. The stop ‘IJzerenleen’ is the capstone of the new traffic circulation plan, which in January 2013 will be evaluated.

Information for citizens, employers and tourists can be found at www.mechelen.be/autoluw. A video on the car-free zone can be found here.