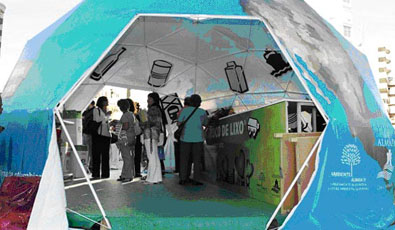 As part of a wider promotional scheme for a new tram line in Almada, Portugal, a campaign was implemented to motivated people to bring their recyclable materials (such as paper, glass, metal etc.) to a collection point, who in return received public transport tickets.

In Almada, private car use has steadily increased in the last decade, and as a consequence public transport use has declined. In recent years the city has attempted to redress this decline, and one of the main measures implemented was the introduction of a new tram line. In order to promote and encourage people to use the tram, and innovative scheme, ‘trips for trash’ was introduced, specifically targeting infrequent public transport users to encourage them to try out the new tram service.

As part of the wider European Mobility Week (EMW) and Car Free Day events, the organizers set up a stand on one of Almada’s main city centre streets, which allowed people to bring along recyclable materials, and in return received a single-trip public transport ticket. This ‘eco-exchange process’ allowed people to trade recyclable materials such as paper, cans, packages or batteries for public transport trips. For example, 2kg of paper or cardboard, 6 bottles of glass, or 1 litre of used cooking oil, were exchangeable for on bus, tram, boat, or train trip.

The scheme was promoted by word of mouth marketing, promotional leaflets and as part of the wider EMW promotions. This was undertaken jointly by the Municipality of Almada with the Regional Waste Management and Recycling Company (Amarsul), and all the public transport companies operating in Almada (Fertagus, TST, MTS and Transtejo).

The “Trips for trash” initiative was one of the most successful activities of Almada’s EMW;

- A significant amount of recyclable waste was collected, with
- 6,300 public transport tickets exchanged to about 2,500 recipients.

Due to the success of the initiative, several other Portuguese cities, including Moita and Almeirim have decided to follow Almada’s example, and intend to include similar “trips for trash” schemes as part of their own European Mobility Week promotions.

The initiative has also attracted considerable international interest, and was cited in an article in the New York Times, and other international and national articles and TV broadcasts.

The innovative ‘trips for trash’ initiative was clearly a successful campaign, and played a significant part in the overall success of Almada’s European Mobility Week campaign. A key success factor was the involvement of the local transport operators at the early planning stage that provided the travel tickets and wider institutional support.

Further, to establish a fair exchange system and entice people to trade their trash, it was necessary to develop a fair ‘exchange rate’, which specified the type and amount of waste that entitled people to free tickets.