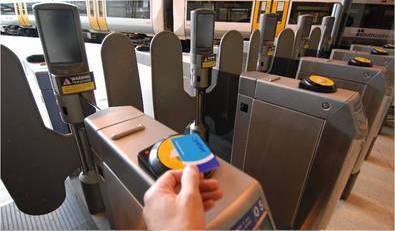 In the summer of 2013 Transport for London (TfL) celebrated the tenth anniversary of its famous transport smart card: the Oyster card. The card makes public transport faster, easier and drastically reduces queues. At the same time, the card registers a host of travel data, which is essential for good transport planning. Throughout the years, TfL has gradually improved the system: Now travellers in London can pay for transport with their 'contactless payment' cards - debit and credit cards provided by banks that can be used to make quick, easy and secure payments without the need to enter a PIN number.
Context
When the number of passengers on the London Underground rose dramatically in the 1990s, TfL had to find ways to get people through the entrance turnstiles at metro stations faster. Besides infrastructural changes, TfL decided to invest in new technology and the smart card, known as the Oyster card, was introduced. At the time the technology was still relatively new. Hong Kong was the only other large city using a similar system. Ten years later, the vast majority of rail and bus travel in London is paid by Oyster. The Oyster card allows seamless travel between all modes of public transport in London. It eliminates the need to queue for purchasing tickets, ensures faster boarding times and a speedier service.
In action
Over the years TfL adapted the Oyster card to meet passengers’ needs. From 2005 Oyster offered daily price capping, automatically providing customers with the cheapest fare. In 2012 Oyster Online Accounts was launched to allow customers to manage their accounts online. In recent years, TfL gradually updated the card-reading technology to accept contactless debit and credit card use. Payments up to £ 20 (€ 27) can be made by swiping a credit or debit card in front of the Oyster card reader - with no need to enter a pin code. This relieves customers from having to top-up their cards in advance.

Besides reforming methods of payment, TfL has fundamentally changed the way it manages its fare box revenue. Thanks to Oyster, TfL is able to control the distribution of revenue between operators, prevent losses from fare evasion and better account for income. The Oyster card also allows TfL to obtain journey data for more efficient traffic planning.
Results
The high usage, network coverage and customer satisfaction of the Oyster card serves as a role model for other big cities. Since its launch on 30 June 2003, around 60 million Oyster cards have been issued and over 85 per cent of all rail and bus travel in London is paid for using Oyster. The number of people paying cash has dropped to less than 1 per cent. This high level of usage generates a wealth of data, which is essential for transport planning.
Peter Lewis, External Initiatives Manager of TfL, explains: 'A strong example of the use of Oyster data is the London 2012 Olympic and Paralympic Games. In order to prevent severe congestion and overcrowding, services were planned to meet expected customer needs. Daily Oyster data was used to enable real-time changes to crowd planning, customer messages and operational flows at stations.’ These insights are now used for transport planning around many major events in central London.
Due to privacy protection issues, the Oyster travel data is sensitive and therefore depersonalised and tightly controlled. Even though the use of the data has occasionally been debated throughout the years, customers are in general very satisfied with their Oyster. Survey results from late 2013 show that overall satisfaction among users continues to track at a high level of 80 out of 100. 'Contactless payment' is off to a good start, as well. TfL reports that since the launch on London buses in December 2013, over 3.5 million transactions have been made. However, this is still only a fraction of total bus payments.
Challenges, opportunities and transferability
'The big challenge for TfL and Oyster is to reduce operational costs of managing the scheme,' says Peter Lewis. 'While the cost of sales has dropped from about 14 per cent at its peak to below 10 per cent, it is in the interest of all of London if we can further reduce the impact on London’s finances, especially if we can reduce or even eliminate the steps that add to this cost.' Examples include reducing commissions paid to agents for Oyster sales, lowering the number of cards that are issued, and a drive to encourage customer self-service. TfL aims to achieve these savings without reducing the quality of service.

Contactless payment is part of TfL’s Future Ticketing Project. Fare capping will apply when the entire transport network sees the contactless technology implemented at Oyster smart card readers later in 2014. By June 2015, a contactless payment card system will replace the current Oyster card. Other plans include the improvement of self serve machines, a much greater on-line service and mobile applications.
In Depth