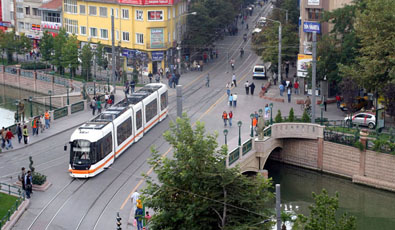 The ESTRAM Project was implemented in order to provide a high-capacity transportation system for Eski?ehir, connecting most of the trip generators in the city. The project was carried out under the 2010 Strategic Plan for the city, which ensured that ESTRAM was well integrated with the other urban projects.

Eski?ehir is a city in the central Anatolian region of Turkey with an approximate population of 450,000. The city has a high ratio of young people owing to the presence of two university campuses, necessitating a highly integrated and efficient public transport system. The Eski?ehir Light Rail Transit System (ESTRAM) Project was implemented in order to provide a high capacity, fast and efficient transportation system, while at the same time reducing traffic congestion and air pollution. There are two lines in operation, the Otogar-SSK line and the Osmangazi-Opera line, providing a 15 km network that links the universities, state and private hospitals, leisure and cultural facilities, the main line Eski?ehir station, the coach station and the city centre.

The initial Otogar-SSK line project commenced in July 2002, financed through an export credit from Sweden and credits from Nordic and European investment banks. A second line, Osmangazi-Opera, was added in 2003. Construction was completed in 20 months in June 2004 and the tram-priority system opened for business in December 2004.

Construction of ESTRAM coincided with a number of other projects in the city being implemented under the Eski?ehir 2010 Strategic Plan, including:

ESTRAM uses 100% low-floor Bombardier Flexity Outlook trams, suitable for use by the handicapped, elderly and infirm. The tram has a normal operating speed of 50 km/h and each tram is capable of carrying 159 passengers with 59 seated. The entire network has a maximum capacity of 120,000 passengers per day.

The electronic ESKART travel pass allows for free transfers between bus and tram, and between tram and tram, provided the transfer is made within 45 minutes.

To promote ESTRAM, a wide campaign was launched, involving handouts and seminars, among other activities, targeting primary and secondry schools, universities and governmental institutions, such as police stations, health centres, fire stations etc.

It can be said that ESTRAM has provided safe, convenient and reliable public transportation in Eski?ehir, and has been recognised as one of the most important and successful rail transit systems in Turkey. In 2004 the project received a 2004 Rail System Award from the UITP (International Association of Public Transport) in recognition of its success, and received ISO 9001:2000 Quality Management System certification in June 2007.

The general concensus is that the arrival of a light rail system in Eski?ehir contributed to the success of the urban renewal schemes, which in return validated the need for a light rail system, providing an overall synergy to the strategic plan. It is also clear that this coordinated approach of transport and urban planning greatly improved the the image of the city.