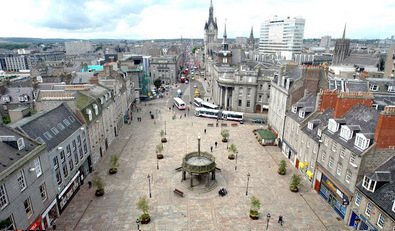 Aberdeen has seen several iterations of Transport Plans, its first Local Transport Strategy in 1993 and the initiation of a Sustainable Urban Mobility Plan in 2012. Its SUMP is currently in the preparation stage and has already been successfully involving stakeholders and citizens as now recognised by the EC.

Aberdeen’s draft SUMP draws its key elements from the problems and solutions that the city, citizens and stakeholders have identified. To achieve this, a communications plan was prepared, which indicates the appropriate stages during the SUMP preparation phase at which stakeholders could be consulted as well as frequency, method and format of communication with stakeholders and citizens.

A Communication tool that hadn’t been used before in relation to transport in Aberdeen are social media channels.  Web links and information were provided on several sites including Aberdeen City’s Facebook (http://www.facebook.com/#!/Getabout.transport and http://www.facebook.com/#!/pages/Aberdeen-City-Sustainable-Urban-Mobility-Plan-SUMP/526942970672568) and Twitter pages (http://twitter.com/aberdeenCC and http://twitter.com/TSAPAberdeen) as well as on the joint partnership for transport and travel information in the region, Getabout (www.get-about.com).>Consideration has also been given to the provision of a blog where interested individuals can comment.

The city council observed that utilizing social media has led to higher response rates than previously achieved for city-wide transport related surveys. It has reached a broader audience, engaging younger citizens as well as those who might not normally consider answering a paper based survey in a library. The use of social media also allows individuals to see what their friends have been looking at, which generates indirect promotional opportunities.

Complementary to this, a series of public workshops targeting citizens were organised at various times of the day over a week in order to maximise the chances of people being able to attend at least one session.

Results from the workshop outcomes, over 300 completed on-street surveys and 489 on-line surveys were used to develop a draft list of urban transport objectives. This includes the creation of public transport hubs, improved access to bus, rail and ferry, and less exposure to high noise levels.

Aberdeen’s SUMP is the result of an open and inclusive process that encompassed public workshops as well as a strong social media presence in order to elicit a wide range of views.

The jury of the European Commission’s first SUMP Award commended this “outstanding participatory approach involving stakeholders and citizens” and honoured Aberdeen with the 10,000 Euro Award prize: “Its successful use of social media demonstrates the Council’s ambition for innovation and connecting to citizens. Good response rates from citizens prove the appropriate application of the chosen tools.”