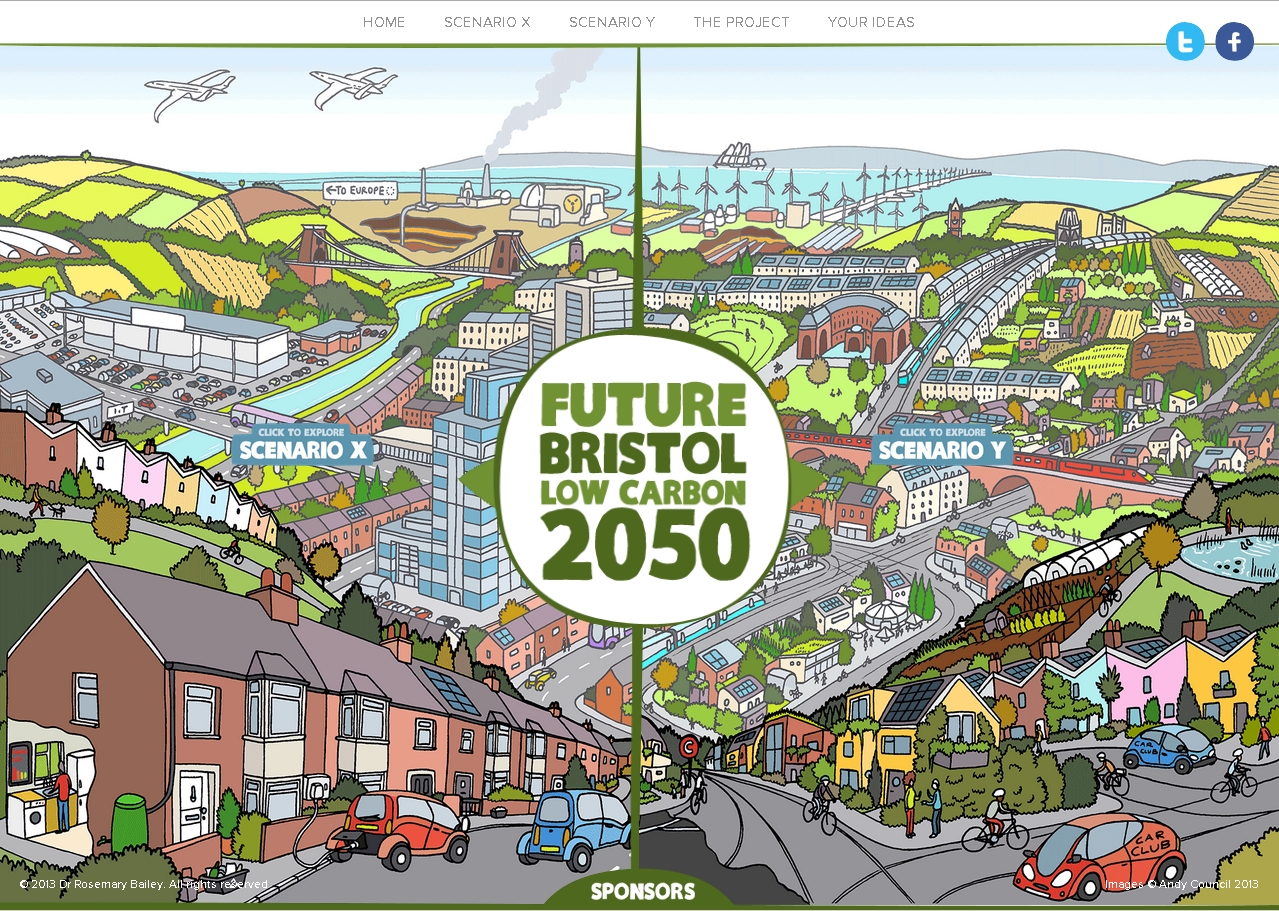 Citizen engagement plays a critical role in Bristol’s ambitions to reduce greenhouse gas emissions. Future Bristol, a digital project conducted in partnership with a local university following four years of research, demonstrates this – engaging the public in what it means for Bristol to be a low-carbon city and giving them a say in shaping the city’s sustainable future.

The Future Bristol website does this by presenting two sustainable futures for Bristol and allowing citizens to vote on which measures to pursue. The website is today the basis for a number of other activities aimed at engaging different groups of citizens across the city.

Bristol has a reputation as the most cycle-friendly city in the UK, building on its 2008 award as the UK’s first ‘Cycling City’. It is working heavily on expanding infrastructure for cyclists and pedestrians and promoting sustainable travel across the city. There are also several car-sharing schemes currently in operation in Bristol.

Bristol’s current public transportation system relies on the bus network, but plans for a Rapid Transit Network to link with existing and future bus and rail services (including suburban and regional services) form part of a wider transport programme. The city also offers many resources for citizens to increase the sustainability of their chosen mode of transport. For cycling, this includes route maps, links to cycling clubs and information on the health benefits of cycling.

Bristol has been involved in Sustainable Urban Mobility Plan (SUMP) activities as part of the West of England Local Enterprise Partnership.

Future Bristol’s aim is to provide an engaging way of communicating the different options that might bring about a low-carbon future for Bristol, without advocating any one particular approach. With this is mind the Future Bristol website(link is external), illustrated by a local artist, presents two different scenarios (X and Y) for Bristol in 2050 as a low-carbon city. They include summaries on ideas related to sustainability, and allow visitors to read more and vote on whether they are good or bad ideas.

The scenarios were conceptualised following a four-year research project by Dr Rose Bailey while at the University of the West of England. Funded by the Engineering and Physical Sciences Research Council,(link is external) the project quizzed 140 influential people from local businesses, charities, councils and universities on what a low-carbon Bristol would look like by 2050 and how it could happen.

Through a three-stage consultation process, the two scenarios were established. The steps that might be necessary to achieve these scenarios were then mapped out by working backwards to the present. Citizens were encouraged to visit the website in a variety of ways. This included engaging visitors at local events and festivals; promoting and networking via social media; targeted school visits and student projects; including it as part of a citizen journalism project with a local radio station; and via ‘green’ networks across the city.

The website received over 31 000 hits in a year, 84 per cent of which were first-time visits. Website traffic spiked during events such as Bristol’s Festival of Nature and the European Commission’s ‘A World You Like’ campaign, as well as during the ongoing campaign through social media. Future Bristol currently has over 300 Twitter followers and over 200 people signed-up to its Facebook page.

The huge amount of interest, web traffic, tweets, enquiries, blog posts and articles generated by the project suggest that it has so far achieved its aim of attracting visitors to the site. The website also received international attention from website visitors and the press, and ranked highly in several competitions run by the European Commission and the International Centre for Climate Governance.

The most popular measures on the website tended to belong to Scenario Y, which featured a more localised and sustainable future - measures that would require the greatest changes to Bristol if introduced. Highly popular mobility-related measures included sustainable shipping in Bristol’s port and high-speed rail, as well as trams and rapid transit buses. In online and offline discussions, cycling and walking were overwhelmingly mentioned as important, necessary and preferable ways to travel to limit congestion and pollution and improve urban quality of life.

‘The project has had so much positive feedback,’ said Dr Rose Bailey, whose research underpinned the project. ‘Everyone loves the idea of using images to convey a complex message and options more effectively, and visual scenarios have been a great way of getting people to think and talk about the kind of future they would rather have.’

The Future Bristol project is now entering a new phase, as part of the city’s European Green Capital engagement activities, where the images and website will be brought to life in innovative ways via a public exhibition and activities.

Although the website received a lot of positive attention, encouraging return visits and continued engagement has been difficult. Most visits have been new, indicating that only a minority of users visited more than once. However, its worldwide following suggests that the ideas in the scenarios and the method of engagement are applicable beyond the Bristol city region.

Encouraging a transition from viewing and voting on measures to contributing to discussions has also been challenging. A possible solution is integrating the comment function with the explanations of measures and voting feature, rather than locating them on a separate webpage. Future updates to the website will consider improving and integrating this kind of functionality.

Overall, using digital and social media to engage people was very effective and website responses were overwhelmingly positive. Tailoring the message of the campaign to be as accessible and inclusive as possible was also important: the sense that one lifestyle, preference or opinion would be worse than another was studiously avoided.

‘This approach could be used anywhere, although tailored to local circumstances,’ Dr Bailey says. ‘The time-demands of promotion, such as tweets, Facebook posts and press releases, were significant. A clear strategy with dedicated staff time is necessary for a public engagement campaign to be most effective.'