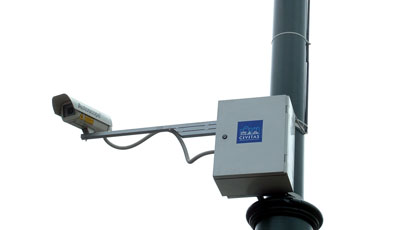 Only on-street enforcement made by city guards and police officers is not enough to prevent car users to enter restricted zones illegally. In the project new solutions in with use of a electronic-based system of vehicle identification will be tested. The electronic access control will be demonstrated at one to three important gates.

The measure concerns the improving of the access control into the B-Zone in the city centre, the implementing of an electronic vehicle identification system, the decreasing of the amount of cars entering the restricted area without permission, the eliminating of traffic passing the old centre city and the improving of the environmental conditions. Innovative is the usage of the electronic identification system and the permanent enforcement of illegal moves of cars without permission.

The B-Zone is a restricted traffic zone in which access is allowed only for inhabitants and goods deliverers. The only control of illegal parking or entries is provided on-street by city guards. This is not sufficient enough to enforce access control due to the fact that the permission to enter the zones is shown on a special ticket behind the windscreen which can be hardly seen without stopping the car. In the city centre of Krakow, there are 3 zones currently operating (A-Zone only for pedestrians and cyclists, B-Zone with restricted traffic (inhabitants and deliverers), C-Zone with parking fees (in operation between 10 am and 6 pm)). The aim of the measure is to demonstrate the electronic access control at one important gate to the city centre.>The system shall help to reduce the transit traffic through the gate by 70%. Initial usage of the system should concentrate on the operational specifications, even without real enforcement. In case of success the system should be spread toward all gates to the B-Zone. There also was research and technological development activities conducted concerning design, analysis and effective evaluation of the electronic identification system.

Deep analysis of potential market for electronic access control systems in Poland has been done. Meetings with 3 potential system providers has been organised. Additionally, several meetings with stakeholders, i.e. Municipal Police, Road Authority has been done. As an effect of analysis, choice of a provider has been decided and preliminary agreement with company has been drafted. 3 places for test of a system has been chosen (Pl. Wszystkich Swietych, Pl. Matejki, ul. Sienna). Test has been performed beginning from December 2007. Also a specific software have been developed. What is most improtant close cooperation with City Guards have been established to fully implement fines coming from electronically recorder illegal entrances.

The effectiveness of recognition plates keep at 80-89%. Analysis done show, that from a theoretical point of view, the income coming from fines for drivers can quickly cover (in the first stage) the costs of the optical recognition system. Positive results at tested gates will allow the City of Krakow to make further steps towards the implementation of modern technology solutions in mobility management.
Topic:
Archive
Country:
Poland
City:
Kraków
Contact:
Maciej Michnej
Author:
Maciej Michnej
Keywords: