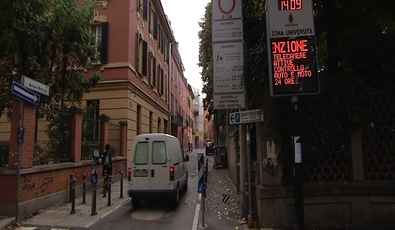 The historic city centre suffers from the negative effects of traffic. The municipality of Bologna decided to close parts of the city centre for individual traffic. Only registered vehicles, buses and taxis are authorized to enter access restricted areas.

Bologna is a demonstration city for the Civitas Mimosa project. Within this cooperation a partly closure of the city centre for motorized traffic was implemented.Due to its strategic position for traffic and its booming industry the increase of traffic in Bologna is growing rapidly. Especially the historic city centre with its medieval character is not well adopted for a high demand of traffic. Many drivers take short-cuts through the city centre or are causing congestion because of looking for parking space.The main objectives of the closure of the city centre are:• Reduction of emissions in the historical city centre• Reduction of vehicle access in semi-pedestrian areas• Flexible access control• Improving of the enforcement of traffic restrictions in semi-pedestrian areas

For the partly closure of the city centre 23 electric pillars and a video-control system was implemented at the entry points of the city centre. They are active 24 hours a day and are automatically lowered periodicly for freight delivery vehicles. In a control centre the policy identify and control the license plates to guarantee that only authorized vehicles enter the city centre. Additionally the police patrols with cameras in the restricted zone to record drivers who park their car illegal. Only buses, taxis and registered cars are allowed to enter the city centre>Combined with the access restrictions the range of public transport and other alternatives to the individual motorized traffic were enlarged and made more attractive:• A network of electric and methane-fuelled bus lines• A car sharing system by the public transport community and the municipality completes the offer of the public transport system• A bike rental system

The overall goal of the decision makers of Bologna to convince people to switch from private vehicles to public vehicles in order to reduce motorized traffic and its negative effects especially in the city centre is partly fulfilled. The number of accesses of the traffic limited zone by individual motorized traffic is reduced of about 20 – 25 %. As a consequence the speed and the regularity of public transport did improve. Due to the traffic decrease there was an increase of road safety. The number of road accidents decreased by 19 %.Former efforts to establish limited traffic zones in Bologna were not successful because there were difficulties concerning the access-control. One factor of success is that the restriction was combined with an improvement of alternatives for individual traffic. Another factor of success is that the police take photos of people who breach the rules of the access restriction. Nobody wants to be watched while breaching a rule. 2010 the activities of Bologna were awarded by Civitas.
Topic:
Traffic and demand management
Archive
Country:
Italy
City:
Bologna
Contact:
Fabio Cartolano
Author:
Thomas Drage
Keywords:
measures - access control
parking management
pedestrian zones