Encouraging locals and tourists to use public transport in Madeira (Portugal) 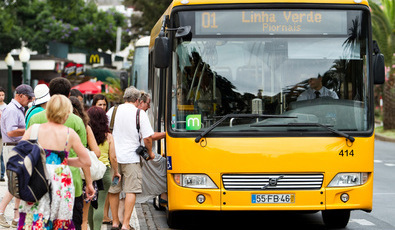 The Green Line bus line and the Tourist Kit initiative were launched in 2009 to encourage locals and tourists to use the bus more often. Since its launch the project has been running at full speed with new updates and improvements. The public transport operator continues to lobby more hotels to participate in the scheme, instead of running their own courtesy buses to the city centre.

Studies conducted by the tourism regional authority have outlined that traffic nuisance is one of the things that tourists dislike the most in Madeira. Actively contributing to raise traffic levels are the 21 courtesy bus services that used to circulate in the Green Line catchment area.
Green Line and its supportive action Tourist Kit were launched within the European Mobility Week of 2009. The main objectives were:

Along with the new high-quality PT line, called Green Line, run by Euro V buses, improvements at the corridor’s bus stops were carried out. New multimedia kiosks were installed along the corridor to inform tourists of the way through the bus stops. A Tourist kit package was provided at the hotels receptions to convince tourists to use public transport to get around the city.
The main obstacles encountered were the limitations to the expansion of Tourist Kit: some hotels do not sell public transport tickets due to their links with local taxis that give strong commissions to hotel receptionists in order to persuade tourists to choose them over the PT service.>In addition to this, some hotels cannot stop running their courtesy bus as they have commercial agreements with tourism operators. Other problems registered was that the project received low suport from those hotels that believe PT is less “exclusive” than a special shuttle service.
This measure had the financial support of CIVITAS MIMOSA project with a co-financing for staff costs and the multimedia kiosks. Also, another project – under the European Regional Development Fund (ERDF) - co-financed 85% the tourist kit materials and the new “green line” layout for busses and bus stops.

All in all, this initiative is proving to be an efficient way of encouraging new sustainable and responsible mobility habits and it is sending out a clear message to tourists that Madeira is a high quality and environmentally friendly destination. Future developments include promoting the Tourist Kit for special events, as well as partnerships with museums to clearly distinguish the Tourist Kit and make it even more appealing.