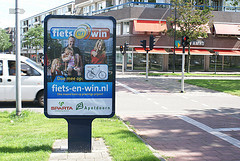 Fietsberaad, the knowledge centre on cycling management in the Netherlands, has developed a reward system, Fiets-en-Win (Cycle and Win), as a new marketing tool to encourage the use of the bicycle. Cyclists who use a free guarded bicycle shed in the cities of Apeldoorn or Eindhoven, can win prizes. Other municipalities or provinces are encouraged to implement this system too.

Encouraging motorists to leave their cars and make trips by bicycle in cities like Apeldoorn, improves the air quality, accessibility of the centre and reduces the shortage of parking spaces. Market research in Apeldoorn showed that a reward system for cycling would encourage regular use of this mode. The main objective of Fiets-en-Win is to encourage the use of the bicycle for trips to the commercial centre of the city by rewarding those that use the free guarded bicycle sheds with entry into a prize draw. Secondary aims of the campaign are to encourage better use of the bicycle sheds to reduce the problem of bicycles parked on the streets and to promote the city centre as a commercial centre. After a pilot in Apeldoorn, the campaign is currently being run in both Apeldoorn and Eindhoven, with a plan to expand to 10-15 other municipalities in 2011-2012.

Fietsberaad and the city of Apeldoorn started developing the system in 2009, Eindhoven joined at the end of 2009. The campaign started in both municipalities in the summer of 2010 and has no end date yet. During 2011, it is hoped that other municipalities will join the campaign.Fiets-en-Win is an easy reward system for cyclists. Participants have a pass that grants them access to the bicycle sheds in the city which they scan on storing and picking up their bike. On scanning this pass they receive one or more digital lottery tickets. In Apeldoorn this ‘pass’ takes the form of a special key-ring and in Eindhoven is the personal city pass owned by all city residents. To win a prize, participants have to register themselves on the campaign website where they can see how many lottery tickets they have and what prizes they can win. The municipality in Apeldoorn is also able to use the data from the scanned passes to ascertain how the bike sheds are being used and therefore how they can be improved for cyclists.Although market research conducted showed that cyclists would prefer to be rewarded by specific products or services, it was decided that a prize draw would be more feasible in terms of expense and time it would take cyclists to collect points for specific products. Initially the pilot in Apeldoorn wanted inner city businesses to sponsor the prizes in exchange for publicity, but there was little willingness to participate.>When Eindhoven joined the campaign, it was decided that prizes should be more cultural or sport oriented such as business seats for important games. Currently leading prizes include a professional photo shoot, a bike and an electric bike.The start up costs of developing the technology for the system were high and the process, time consuming, but the running costs of the campaign will be considerably less. A municipality with about 4 bicycle shed requires an investment of €15,000 with additional costs for promotion and prizes.

Currently the system in Apeldoorn runs better than in Eindhoven. The special key rings are more visible and the combination with the access control system has clear advantages. Particularly, the system in Apeldoorn gives a lot of information to the municipality regarding the clients of the bicycle shed. Already more than 40.000 inhabitants of Apeldoorn have a Fiets-en-Win key ring and 5.000 of them are registered on the website to take part in the lottery. The city knows exactly the occupancy rate of the sheds at different times and they know when interesting target groups, like people who only store their bikes sporadically, are present. This therefore offers the opportunity to target specific groups of cyclists. In addition, feedback shows a high degree of satisfaction with the campaign and with the prize winners.Fietsberaad has, together with Apeldoorn and Eindhoven, invested a lot of time and government money in the technology of this reward system. Other authorities, municipalities or provinces, can now implement this system for a lower cost of €5.000. For this they get the website structure, a registration system for bicycle sheds that can also be used as an access control system for bicycle paths or underpasses, a uniform look-and-feel (logo, house style, name) with the possibility of local adaptations and a clear segmentation of ownership and tasks.Other interested municipalities should contact Fietsberaad about implementing the system as they are owners of the concept and the tools like the website, the scanning equipment and the corporate identity. They also give support and organise the exchange of knowledge and experience for new municipalities running the campaign. The aim is for the campaign to grow, with 10 to 15 municipalities joining in 2011-2012.