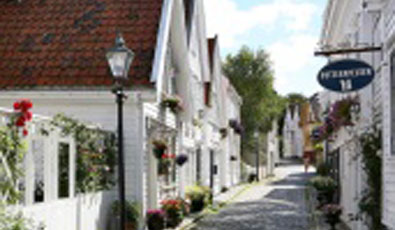 Stavanger has participated in the EU project ELCIDIS in implementing an electric vehicle distribution system and establishing itself as a leading city in electric transport.

The city of Stavanger is located on the south-west coast of Norway, with a population of around 100,000. Despite, the oil industry being the main employer in the region, the city of Stavanger’s transport policy aims at reducing dependence on petrol/diesel vehicles in order to reduce polluting vehicle omissions.

Over the past decade, Stavanger has introduced electric powered buses to its public transport system and implemented the necessary infrastructure for private electric cars. The city has taken part in the EU project - ELCIDIS - in order to implement an electric vehicle city distribution system which has involved a review, of urban-freight in Stavanger and a replacement of goods vehicles with electrically powered vehicles.

A review of the transportation needs of 4 companies/organisations was conducted along with a feasibility study of the routes travelled within the city in order to determine whether steep hills would be prohibitive to electrically powered vehicles. 8 electric vehicles were introduced as follows:

A new charging station was built in the city centre to facilitate use of these vehicles.

The vehicles were built by Citroen and Mercedes, the maximum payload range between 300 and 500 kg. The gross vehicle weight is between 1400 and 3000kg. Top speed is 90km/h and the vehicles have a range of 60 - 80 km.
The batteries were made of Nickel cadmium or Lead acid.

In the first year of operation, the distance travelled by the vehicles totaled 54,000km and the companies experienced very few technical problems with their operation e.g. battery breaking down in a vehicle used by Stavanger Kommune.

The ”limited” driving range that is often used as an argument against electric vehicles was not found to be a limiting factor in this project. The highest range for one vehicle was 90 kilometres.

The total electric energy need for the seven vehicles per year is only 16.800 kWh.
Per vehicle average 2.400 kWh, equivalent to the energy needed of a tiny electric resistance heater in a small 2m2 toilet room in a house switched on year round.

Cost analysis showed that the savings per electronic vehicle to the organisations was 1,00 EURO per 10km travelled.
The organisations were pleased with their performance and intended to continue running the vehicles beyond the life of the ELCIDIS project.
Provided the batteries are well maintained, maintenance costs for an electric vehicle are far lessthan for combustion engines that need oil etc.
Including these savings and savings in omitted toll road fees, free parking etc. could lower thepay back time for the extra vehicle costs down to 1,5 years or 3 years.

The charging station constructed for the use of the project is now open for use by all users of electric vehicles in Stavanger. Use of electronic vehicles has continued to increase in the city with strong encouragement and incentives from the local government.

In 2009 Stavanger will host EVS-24, a global electric transportation forum at which the latest technology in electric transport will be showcased. As part of the event there will be an electric vehicle road race from Oslo-Stavanger which is anticipated to attract much media attention.