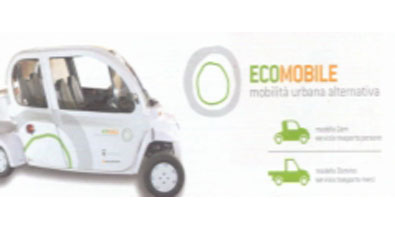 Since end of June 2006 the City of Trento (Italy) and the traffic company “Trentino Mobilità” provide ten new electrical cars. This innovative fleet is free of charge and follows the idea of a clean urban transport system with zero emissions, low noise exposure and intrusive. This vehicles are thus optimal adapted for historical and therefore “fragile” city centers.

The local police releases every day from 10 to 15 permissions to the access of the historical and traffic limited city center of Trento. This means, that every year about 3.200 new authorizations are decreed.

Main objective of the so called “Eco Mobiles” is to offer an alternative, clean and not contaminating individual mobility service for the city center.

This service is projected especially to citizens who have to carry heavy materials or packets through these area or would like to accompany elderly or disable persons. Beyond, the city administration would like to point out that measures against the traffic situation in the historical center are attempt and alternatives to the proper car are possible.

The city administration of Trento provide ten new electrical cars that are free of charge. The vehicles can be used by everyone in posses of a driving license: from the pregnant women to the retailer or everybody else that carry heavy objects.

The cars are parked in a central city garage. To drive the cars through the city center, users don’t need a special permission from the police. Backwards, the electrical cars can also be used to drive to the hole urban area of Trento.

Just registered once and everybody can use the clean transport vehicles. Precondition is to reserve a car at least one hour before by calling a free telephone number.

The maximum speed is about 40 km/h and the power supply last for 50 kilometers (4-seat-model) respectively 70 kilometers (2-seat-model). To charge the batteries completely takes about eight hours.

The cost amount 15.900 € for the four-seat model and 14.000 € for the two-seat model. A famous European bank, the UniCredit Bank, sponsored a part of the cars, contributing 168.000 € for the acquisition. Furthermore, the bank make available the proper network of branch banks to promote the service and book the cars.