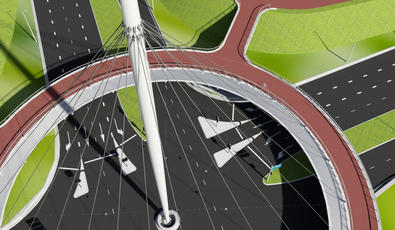 Located on the route between Eindhoven central station and the airport, the Heerbaan roundabout was predicted to see a significant increase in traffic in the near future. For this reason the municipality of Eindhoven constructed a new landmark: a separate roundabout for cyclists located above the motorised traffic.

The roundabout connecting Eindhoven and its suburb Feldhoven (two high-graded residential, business and research areas of strategic significance for the “Brainport Eindhoven”) was located strategically within the west corridor connecting the city with the airport. Traffic models suggested a significant increase in motorised transport on this route until 2020.

For this reason, the former Heerbaan roundabout had to be modified to handle increased traffic volume and as the interesection is an important link for cycle routes, the safety of cyclists and pedestrians was also of great importance. As a solution, infrastructure separating the various road users was designed and a bridge overspanning the intersection constructed. This bridge, eventually, became a “floating roundabout”, which opened in June 2012.

The 'Hovenring' is a flyover for pedestrians and cyclists, which crosses the intersection 4.50 metres above street level. The roads underneath descend by 1.50m towards the lowered intersection, which reduces the climb for cyclists and the noise pollution from motorised vehicles. The initial idea, however, was to build a tunnel for cyclists and pedestrians, which eventually was not implemented for safety reasons. The final decision to build the Hovenring floating roundabout was made considering traffic flow, cyclist comfort, safety and environmental aspects.

This innovative solution allows all non-motorised traffic participants to safely cross the intersection without interruptions by traffic lights. It is supported by cables extending from a single central pylon, 70 metres high, which eliminates the need for intermediate supports or massive supporting pillars on the ground. This results in an open intersection with unobstructed views also for motorists.
At night, the pylon and the ring of steel lamellas are illuminated – which literally makes the roundabout appear free-floating. It also complements Evoluon, a light needle 2.5 km away. Eindhoven, known as the “City of Light” (due to the company Philips originating there and because of many projects involving lighting up buildings) now owns a new illuminated landmark with the Hovenring.

First counts indicate that the Hovenring is a popular route, being used by 4 to 5,000 cyclists every day. The costs for redesigning the intersection amounted to 11 million Euros out of which approximately 60% was spent on the construction of the roundabout flyover. The city of Eindhoven covered 40% of the costs, and invested about 2.6 million Euros in the cycling infrastructure.

The remarkable investment in cycling infrastructure was made as an integral part of mobility and town planning in Eindhoven. It was the intention that the intersection would become a landmark of the city’s West corridor, which represents an important connection between the areas of Eindhoven in- and outside of the ring road.