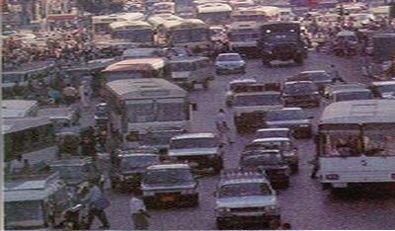 Compressed natural gas (CNG) is being produced in Egypt to fuel natural gas vehicles (NGVs). The use of CNG by the transportation sector was introduced since 1995 as a partial solution to heavy pollution problems affecting Cairo, to reduce dependence on gasoline and to utilise Egypt's abundant natural gas.

Egypt sought solutions to Greater Cairo’s heavy air pollution and public health concerns. In the framework of its national policy to switch from oil to natural gas, the use of natural gas as a transportation fuel was also endorsed as a means to improve air quality and public health. In addition, this would create a new customer segment for the domestic consumption of Egypt’s abundant natural gas reserves.

Egypt's Petroleum Ministry embraced the use of natural gas as a transportation fuel and in 1992 determined that two pilot projects would be initiated:

After the successful outcome of these two pilot projects, the Egyptian government encouraged the private sector to begin commercialising natural gas vehicles (NGVs) through the natural gas vehicle program. A decree from the Petroleum Ministry required all approved CNG companies to pursue two major objectives. The first was to construct and operate CNG fuelling stations, and the second was to construct and operate vehicle conversion centres. Each vehicle conversion also produces a customer for the CNG fuelling station, promoting more efficient CNG market development.

In December 1994 the first company to convert gasoline vehicles to natural gas was formed. About 180 CNG vehicles were introduced during the two pilot projects (150 bi-fuel automobiles and 30 dedicated CNG mid-size buses).

By the end of 2005 there were six CNG companies, 93 CNG fuelling stations set up by the government, private CNG marketing companies and 26 vehicle conversion centres in the Greater Cairo area, along the Suez Canal, and north to Port Said and Alexandria. More than 63,000 CNG vehicles are now in use, 75 per cent of which are taxis, mainly in Cairo. This represents about 3 per cent of the world's CNG vehicles. The oil ministry is to switch Cairo's entire public transport system to gas, to be followed by Greater Cairo's 120,000 taxis. Egypt now ranks number 8 out of the 49 countries conducting clean fuels programs, based upon the total number of CNG powered vehicles. In addition this new industry has created over 800 jobs to manage, operate and maintain these CNG fuelling stations and vehicle conversion centre facilities.

A primary key to the NGV industry's success in Egypt is a package of incentives offered by the government, including five-year tax holidays for CNG companies, low-cost conversion charges for car owners and the attractive price differential between CNG and gasoline (CNG costs less than half the gasoline price). In addition, a typical vehicle conversion costs the customer about $1,500), thus owners of high fuel use vehicles, such as taxis, can recover the cost of the vehicle conversion in as little as six months from fuel savings alone. This clearly explains why taxis have been the most converted fleet. In addition, CNG's characteristics include excellent engine starts in temperature extremes due to its 130 octane rating. Egypt’s CNG industry will implement a new “Gas Card” system. All customers who have outstanding conversion loan balances, and all new financed conversion customers, will begin paying the gasoline price each time they fuel with the difference being credited against their receivables balance.

Another exciting development for Egypt's CNG growth was the EEAA/USAID-sponsored Cairo Air Improvement Program (CAIP). This initiative focused on improving Cairo's air quality through reducing harmful emissions from lead smelters and vehicle exhausts. Part of the programme included providing 50 dedicated CNG public-transit buses to the CTA and GCBC. The bus bodies are locally manufactured, the CNG engines are manufactured by Cummins in the United States and the rolling chassis were supplied by a US manufacturer. Key challenges for the government have been to fund the conversion of some 3,500 public buses operating in Cairo and change the price differential between CNG and diesel, which is heavily subsidised.

A sustainability Plan for the CNG Bus Pilot Fleet was issued to assist the public transit sector in addressing sustainability issues regarding their current and future CNG bus fleets.

Some of the key barriers to expansion of the CNG transit fleet and possible steps that can be taken to overcome those barriers have been considered, based laregely on local end users' experiences. This will enable staff to evaluate future proposals and incentive programs involving CNG buses with expanded knowledge and help ensure that future funding efforts are expended towards the most efficient and cost-effective methods of expanding and maintaining CNG bus fleets.

Today, Egypt has about 158,000 natural gas-powered vehicles and about 119 CNG fueling stations.