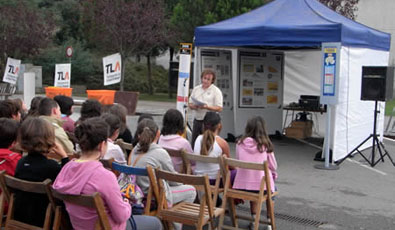 A municipality of 13,800 inhabitants created a continuous initiative its urban public transport service amongst pupils. During five years different educational activities were undertaken to broaden their knowledge of public transport.

An urban public transport service was introduced in 1999 in Lliçà d’Amunt (13.800 inhabitants). A number of promotional methods had to be devised to increase awareness. The easiest would have been to hand out leaflets, explaining the advantages of urban transport, hoping that the citizens would change their habits and begin to use this new system. Instead of this, two lines of action were initiated in parallel: the creation of a brand for the urban transport service, and the education, to promote sustainable mobility among school children.

On the one hand, a brand was created and promoted. This was to help the citizens to identify public transport easily.On the other hand, the campaign “A day with urban transport” was created to teach the pupils about the public transport service in their municipality. First, a pilot project was undertaken in 2003. This helped define a programme of the workshop and determined what the most effective target group was. The activity was officially implemented in the school year 2003-2004 and all schools took part in it.>At the end of 2004, a survey of the pupils was done. The results were clear: pupils who had participated in a workshop had a high knowledge (90%) of urban transport, while the pupils who hadn’t participated averaged 60%.To increase awareness further, a new workshop was created for the school year 2004-2005: The workshop, “Public transport gets you further”, had pupils between 12 to 14 years as its target group. With this workshop scope was widened, which included explaining the possibilities of fare integration, interurban buses and the commuter railway.The campaign “You have your bus” was implemented in 2006 to make people aware of the new corporate image of the urban public transport service. This activity consisted in the construction of a bus, using and decorating empty biscuit packaging, transforming it into a funny reproduction of one of the urban buses.

Yearly, more than 600 pupils between 9 and 14 years took part in this educational project on sustainable mobility. The key to the success of the project was the acceptance and the impulse given by successive municipal governments, believing in the positive effects of a continuous campaign.
Topic:
Collective passenger transport
Archive
Country:
Spain
City:
Maresme
Contact:
Kerstin Burckhart
Author:
Kerstin Burckhart
Keywords: