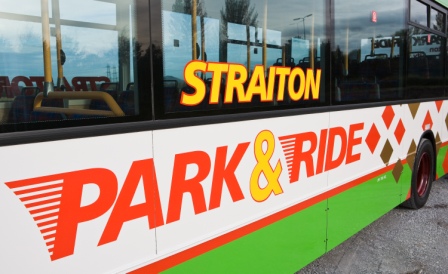 Unlike many other UK cities who have operated successful P&R facilities for over a decade, Edinburgh (and Scotland generally) has been slow to embrace the clear benefits of such schemes. However, since 2004 a number of Scottish cities have adopted the P&R concept. In Edinburgh, the council, its partners, Lothian Region Buses and TIE - a private project-management company owned by council - set about constructing of a number of P&R facilities in Edinburgh.

In early 2008 Edinburgh had four successful P&R facilities operating in Hermiston, Ingliston, Ferrytoll and a rail link at the Newcraighall site. This case study focuses on the Hermiston and Ingliston sites. The Ingliston project was managed by TIE on behalf of Edinburgh council. Construction of the facility, off the A8/Airport junction on Eastfield Road began in September 2004. The 550-space site cost £ 2.6m (€ 3.5m) to build and is served by two bus services operated by Lothian Buses. The branded express service X48 runs at least every 10 minutes in peak times with a direct link into the city centre, and service 35 which travels to Edinburgh Park, Sighthill, Chesser, via the old town and on to Ocean terminal.

Hermiston was project-managed by the council itself. Situated on the A71 west of the A720 city by-pass junction, this site has 450 parking spaces and cost £ 3.4m (€ 4.6m) to construct. The slightly higher costs than Ingliston were due to improvements in the nearby road network, allowing better bus access to the site, while also creating a new bus priority lane from the proposed Hermiston junction connecting to the Calder junction. The facility is served daily by bus services 25 and 34, and on Mondays through to Fridays during peak times the 45 and express service X25 Hermiston offer a service to the city centre every five minutes. There is also a night service served by N25.

Parking at each site is free and bus fares to the city centre cost £ 1.30 (€ 1.80) each way (or less with monthly and annual passes). By 2011 Edinburgh had three more successful P&R facilities operating in Wallyford, Straiton and Sheriffhall.

Positive public opinion and frequent use are the best way to gauge the success of any public transport initiative. In 2008, both sites were operating at 80 per cent capacity and 500 new spaces were set to be created in Ingliston in summer 2008. Results of a 2008 survey by Edinburgh council showed that:

In total, Edinburgh council estimates that over 100 000 road trips into Edinburgh have been averted. With plans to expand both Hermiston and Ingliston and adding two new P&R facilities, this reduction in inner-city car trips will increase these figures further.