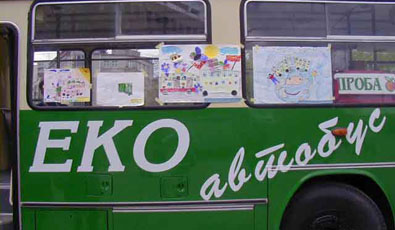 As part of a project JSP the Skopje public transport company has converted more than 30 buses to be able to run on a mixture of compressed natural gas (CNG) and diesel. These were introduced along with a large scale promotion campaign, to convince transport users about the importance of sustainable urban transport. The operation of the converted buses contributes to significant emission reductions in the city of Skopje.

Main source for harmful emissions like particulate matter (PM), nitrous oxides (NOx) and hydrocarbons (HC) in the city of Skopje are public buses. Therefore a project was initiated to convert those buses targeting significant emission reductions. One partner in the project is the public transport enterprise JSP Skopje that introduced a compressed natural gas/diesel mixture as bus fuel and converts a part of its bus fleet to use this mixture (dual fuel engines). The project aims to introduce 30 buses during the first phase, and 100 during the second.

The Ministry of Environment and Physical Planning, the Office for LEAP-Skopje, and Skopje municipality, have joined to support the first phase. Additionally JSP-Skopje intends to apply for donations from international sources. The Implementation of the proposed activities in the master plan for phasing out leaded petrol will be a surplus for the transport/environment integration.

The realisation of this project was supported by City of Skopje, Ministry of Environment and physical planning, JSP Skopje, AD Makpetrol Skopje, NGO Proactiva Skopje.

Conversion of the buses
In total 280 buses are running in Skopje. The majority (230 buses) are operated by JSP, 50 buses are operated by private companies.
In the beginning of the project in 2003 two dual fuel engine prototypes have been built running on approx. 40 percent of diesel and 60 percent of CNG. In the second phase of the project in 2006 additional 30 eco buses have been introduced.

For the public awareness campaign, a multimedia happening in the center of Skopje was arranged. Two of the converted buses were open to visit for citizens. Furthermore 500 info stickers and radio commercials were produced.

The information provided encouraged citizens to carefully consider what type of transportation to use, and to use those means of transport which least contribute to the degradation of their standard of living.

The information, provided through the public awareness campaign, encouraged citizens to carefully consider what type of transportation to use, and to use those means of transport which contribute the least to the degradation of the standard of living.

The operation of the converted buses contributes to significant emission reductions in the city of Skopje for all measured substances. For detailed information see below and in the attached document.