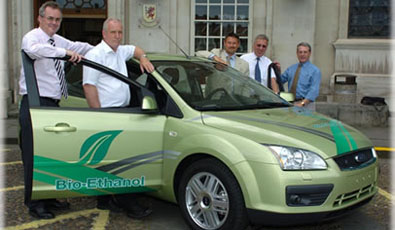 Somerset County in South West England is developing as the leading UK region in the E85 bioethanol market. Those involved include: Morrisons, a supermarket chain, Green Spirit Fuels, Ford, Somerset County Council who have worked to promote bioethanol since 2004; and Avon & Somerset constabulary.

The project is an essential partnership for the County Council in their efforts to tackle the affects of climate change for Somerset residents. The South West Region, including Somerset also has a target to cut CO2 emissions by 20 percent by 2010 and the Council hopes that the FFV, along with its nationally recognised excellence in Waste and Sustainable development, will help the County Council contribute to the region's effort to meet this target.

There are 4 fleets involved in the study. Forty flexi-fuel vehicles were delivered in March 2006: 15 to Somerset Police , 10 to Somerset County Council, 10 to Wessex Water and 5 to Wessex Grain. And in September 2006 Ford delivered a flexifuel vehicle to the Environment Agency’s Bridgewater office. All organisations use there cars in the local Somerset area where five filling stations sell bioethanol.

Morrisons, the UK’s fourth largest supermarket chain, has 13 E85 pumps in England, most of which are in East and SW England. The supermarket chain has pledged to open one new E85 fuel pump at every new store they open. Morrisons was the 2006 winner of the Greenfleet Awards alternative fuel supplier of the year. Green Spirit Fuels was founded by grain trader Wessex Grain to produce bioethanol.>It is constructing the country's first production plant in Somerset. Another plant in the northwest is also set to come online in 2008.

The E85 bioethanol market in the UK is currently very limited. The UK government currently allows a fuel duty rebate of 20 pence (about 0,30 Euros) per litre on bioethanol and a £10 (about 15 Euros) reduction in Vehicle Excise Duty (VED) for environmentally friendly cars like E85 vehicles. But flex-fuel vehicles require about 25% more fuel per kilometre to run on bioethanol and there were no further subsidies.

The CO2 emissions performance is good. Independent analysis of total CO2 released by a Ford Focus FFV by Imperial College, London, put the car's emissions at under 100 grammes per kilometre, while Ford's 1.8-litre FFV emits 169g CO2/km.
The experience with the vehicles has been good so far, with no problems reported with any of the vehicles.

Results have been achieved in Somerset because of the combined efforts of the various parties. This has both been coincidence and design. One contributory factor was the European-funded project, BioEthanol for Sustainable Transport (BEST), to which several of the organisations described were partners. The project was coordinated by Somerset County Council. EU financial support was given through BEST; and project partners also provided some funding. The work and investments within BEST gaining European support is estimated to be 18 million Euros.