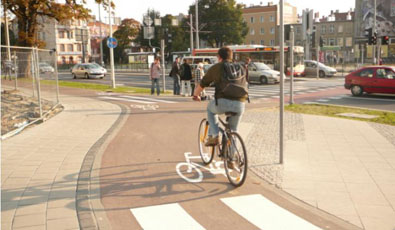 Gdansk is a leading city in Poland for cycling. The city authorities are working to build a comprehensive network of cycleways by continuing to develop its cycling network using the UN’s Global Environmental Facility.

The experience of many European cities shows that the provision of cycling infrastructure helps to change the way people commute, regardless of the weather or terrain. In Gdansk the use of bikes can be significantly increased by 10% over the next 10 years and achieving this is one of the policies of Gdansk’s Development Strategy until 2010. If this programme is to succeed, the city is going to need the total of at least 150 km of cycleways. In promoting this, there must be an understanding that:With rising congestion, the risk of an accident involving a cyclist casualty is increasing.This is why cyclists must be ensured that using the city’s transport system is safe both for recreation and commuting to work, school and to the shops.Gdansk’s cycling policy is set out in the “Concept of Gdansk’s cycleway network including the design of a cycle track along Gdansk’s main artery”.

Gdansk is a leading city in Poland for cycling. The city authorities are working to build a comprehensive network of cycleways by continuing to develop its cycling network using the UN’s Global Environmental Facility.Between 2004-2006 some 20 km of cycleways were built in Gdansk for the total of PLN 22 M.>There are about 500 bike parking stands. Cycleways make Gdansk a more attractive place for domestic and foreign tourists. Commuting by bike and public transport is on top of Gdansk’s sustainability agenda. With raising awareness of the risks of uncontrolled motor traffic, more and more people use bikes because of the benefits for health and pleasure. Gdansk’s efforts to promote cycling have been recognised by the Ministry of Environment, which supported the city in its earlier cycling projects.Between 2007 and 2013 Gdansk plans on building about 85 km of new cycleways.

The total length of the main routes planned in the “Concept” is 150 km, most of which are cycle tracks. The system of cycleways in the “Concept” serves as a benchmark for all of the city’s proposed cycleways and makes sure that they link into the regional cycleways in North Poland.Gdansk’s cycleway network has been designed to the following standards:
Topic:
Intermodality
Walking and cycling
Archive
Country:
Poland
City:
Gdańsk
Contact:
Malgorzata Ratkowska
Author:
Malgorzata Ratkowska
Keywords: