Development and implementation of a mobility policy for 17 tourist destinations in Flanders. Belgium. 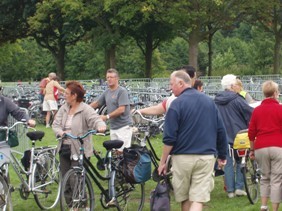 This pilot aimed to introduce sustainable mobility into the management of recreational destinations both on the Belgian seaside and in the rest of Flanders.

In a first phase, managers of tourist destinations were contacted in order to present the possibility of co-operating in the STREAM-project (funded by Intelligent Energy Europe). This marketing effort was made in close co-operation with the Flemish Tourist Board ‘Toerisme Vlaanderen’ and the non-profit organisation ‘Toeristische Attracties’ (organisation of tourist attractions). After this mobilisation effort, and apart from the pilot site of Puyenbroeck, 16 destinations, 3 of which were coastal destinations, agreed to co-operate.

In a second phase, the 16 recreation sites were consulted to develop a mobility policy. More precisely, the following services were delivered:

Where necessary, on site surveys were conducted in summer 2007 in order to define the existing mobility patterns.

Some attraction managers proved difficult to convince to operate real changes. A legal framework would probably generate more concrete actions. Since it would be applied to all destinations, it would take away the argument that time invested in mobility management is time lost for the core business and competition with other destinations.

All 17 destinations participated in a general awareness campaign to the Flemish public in the summer of 2008. The campaign was about the results of the STREAM-approach in Flanders and sustainable mobility for recreation in general. Every week during July-August 2008, 2 attractions were highlighted, events were organised at the sites and a lottery was organised among visitors coming to the site by sustainable transport modes.

Several mass media channels were used to attract attention to the events:

The project has inspired not only attraction managers but also Flemish Region policy makers to integrate sustainable mobility for tourism in their policies.

Collected within the STARTER project - http://www.starter-project.eu