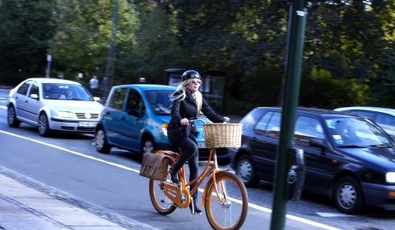 Cycling is a widely popular means of transportation in Copenhagen. To further promote this healthy alternative to car-use and public transport, Copenhagen is developing a network of 28 Super Cycle Highways. The first route (the Albertlund route) was opened in the Spring of 2012, followed by the Farum route in 2013. Between 2014 and 2018 nine more routes will be constructed. The initial results are promising: on the Albertlund route a 10 per cent modal shift to cycling has been reported.
Context
Copenhagen has a population of 559 440 while the area of Greater Copenhagen, which consists of 18 municipalities, has a population of around 1.97 million. Each day 150 000 cycle in the city. Copenhagen plans to increase the modal share for bicycles from 36 per cent (in 2012) to 50 per cent in 2025. In 2012 the modal split for daily commuting was: cycling (36 per cent), public transport (33 per cent), car travel (25 per cent) and walking (6 per cent).
One of the means by which Copenhagen intends to achieve a higher percentage of bicycle trips is by increasing the capacity of the cycle tracks to the city centre. The city plans to accommodate an additional 60 000 cyclists by 2025 by developing a network of Super Cycle Highways in the area around Copenhagen. The Super Cycle Highway is a major part of Copenhagen’s recently developed Sustainable Urban Mobility Plan (SUMP).
In action
In 2009 Copenhagen contacted the surrounding 16 municipalities regarding co-operating in the creation of a network of Super Cycle Highways. A Super Cycle Highway is a route where commuters’ needs have the highest priority. The routes offer fast, comfortable and safe service, and connect residential areas with places where people work or study. Transit areas for public transport are also part of the routes. The highways are as direct as possible, cutting down on the number of times cyclists have to stop. For instance, cyclists will have a green wave of traffic lights during rush hour.
All municipalities were enthusiastic about co-operating in this new and innovative idea. To formalise the co-operation and to ensure momentum, a secretariat was formed to take care of communication, application for funding, overall management and evaluation. Together, the municipalities have developed a conceptual strategy and a plan for the network of Super Cycle Highways (in total 28 routes of about 500km). Funding was organised in the following manner:
The division of the funding was a political decision among the municipalities involved. The state of Denmark has a ‘fund for more cycling’, out of which part of the funding for this project was generated. As soon as funding was available a close co-operation between the municipalities started, with decisions being made on the specifics for each route. Common activities included route identity, communication and evaluation. Infrastructure was divided between 'basic' and 'ideal'. So far all municipalities have managed to obtain funding to implement at least the basic level of infrastructure. External consultants screened each existing cycle route and made suggestions on ways to turn them into Super Cycle Highways.
Results
The pilot project was the Albertslund route, which involved five municipalities and is 17km long. Both the route and the process of establishment were evaluated in terms of travel speed, purpose of the trips and frequency, experienced level of safety, number of accidents, comfort (evenness of the road), experiences with services (air pumps, high bands to step on while standing still at traffic lights) and number of travellers. A number of cyclists using the route were interviewed. In addition, some of the involved municipalities were interviewed on the plan and process. The main findings were:
Challenges, opportunities and transferability
'Political engagement is overall the most important thing to successfully build a network of Super Cycle Highways,' says Tine Brand Nielsen, project leader of the secretariat. With a feasibility study, a socio-economic analysis and a visit from a politician connected to the London Super Cycle Highway, arguments for a Super Cycle Highway network were collected and presented to both national and local politicians. Emphasis was put on the relatively low cost compared to building a vehicle highway or subway system, as well as the benefits in terms of reducing traffic congestion and the improvements possible in terms of individual and environmental health. Proper planning and clearly defining the project and final product are important to enable the municipalities to define staffing needs.
An evaluation carried out with the involved municipalities showed that they considered having an independent secretariat taking care of communication, application for funding and overall management to be extremely important. In addition, the secretariat conducted the evaluation of different actions, the results of which were used to improve policies. (Evaluation data is, for example, used to identify bottlenecks and improvements that can be addressed in future policies, as well as ways to enhance communication regarding the success of the Super Cycle Highways).
The use of independent external advisors for screening the existing infrastructure was considered to be beneficial to the process. To ensure commitment, municipalities were required to formally commit to the project, and meetings were held alternately in all municipalities involved. A step-by-step approach has been used for expanding the highway network, building towards 28 Super Cycle Highways. The existing highways will be carefully monitored and, where needed, improved. The evaluation of the Albertlund route revealed that traffic has not noticeably improved, as there are still a significant number of stops at traffic lights. This is planned to be addressed by 2015.
In Depth
Topic:
Walking and cycling
Region:
Northern Europe
Country:
Denmark
City:
Copenhagen
Contact:
Tine Brandt-Nielsen
Author:
Jan-Willem Van Der Pas