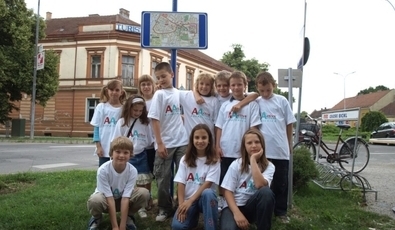 To increase the number of people walking for everyday trips, a network of safe, pleasant, barrier-free, well lit and maintained walking paths were designed and implemented in Koprivnica.

The need to improve walking conditions was perceived as an important requirement for increasing the number of daily walking trips for local people in Koprivnica. However, in order to attract more people to walk the quality of walking areas must meet the needs of their most vulnerable users, while the attractiveness of the scenery should also motivate more citizens to walk for health and recreation purposes.

To achieve these goals, members of the Active Access project team (consisting of health professionals, health and sports clubs representatives as well as town planners and tourist officers) were in charge of the design of new/ improvement of existing walking routes. By studying examples of similar walking paths networks in Europe (especially Walk 4 Life), they conducted a detailed walking audit and designed the new walking path network.

Prior to their implementation, the potential Health Paths network was audited by various user groups, including walking and health clubs, and school children. Suggested improvements included pavement repairs, improved crossings, curbs removal, new benches and fountains with safe drinking water. Following these audits, improvements were made by the City of Koprivnica and Municipal utility company.

The new network contains 4 walking paths of 1km, 2km, 3km and 3.5 km respectively, and was opened in June 2010. They were named according to their position in the city, important landmarks or their ‘sponsors’ requests. Sponsors of the paths are organizations responsible for further promotional events or activities.

Maps detailing the Health Paths were printed in the form of tear-out pads and delivered to health professionals and pharmacies alongside the paths, and also the local tourist information office to distribute to potential users. The reverse side of the map contains ‘motivational’ text written by members of City hospital's Active Access team. 7 signposts were placed at central points of the network which contain enlarged printed maps of the network and a number of information ‘pointers’ indicating the distance to town landmarks expressed in the average walking times.