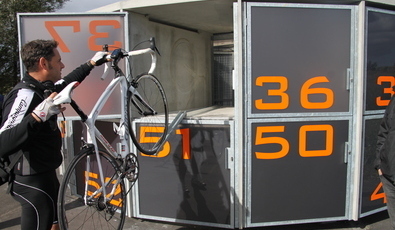 The city of Aarhus has created a new solution to increase the number of multimodal trips and encourage commuters to cycle for part of their work journey.
Context
Aarhus is the second-largest city in Denmark with over 300 000 inhabitants. Many commuters that work in Aarhus live in the surrounding municipalities and thus have a long drive before they reach their workplace. The City of Aarhus designed a new project that invites commuters to exchange the last part of the drive with a bike ride.

The project has been named a 'Park and Bike Terminal'. It is the first of its kind in Denmark and is located by Egå Engsø in Lystrup. The main idea is to increase the number of multimodal trips by establishing a parking facility close to radial roads and cycle tracks. This goal is in line with the Cycling Action Plan for Aarhus that has targeted an increase of the number of multimodal trips as one of the means to solve congestion problems in Aarhus.

The total cost for the project was € 250 000 and it was funded and implemented in December 2011 by the Municipality of Aarhus.
In action

The starting point for the project was that the city wanted to give people that commute to Aarhus the opportunity to park outside the city centre. Instead of wasting time on congested roads they could cycle the last part of their trip and at the same time get some fresh air and exercise. It was decided to build the first facility in Egå Engsø as it has space for about 100 bikes and 60 parked cars. Commuters who want to leave their bike at the terminal at night have a possibility to rent an individual and locked parking booth for around DKK 400 (€ 50) per year.

Aside from the parking facilities, the project also included an outdoor fitness area and a bicycle playing area for children. Thus the terminal area is intended to be a recreational area that can be used for various activities during the whole day and not just when commuters use it in the mornings and afternoons.

The Park and Bike Terminal in Lystrup was established in connection with a whole new cycle route to Aarhus, where planners have focused on creating a fast and comfortable route that also offers a recreational experience on the bike ride, far from cars and noise.

The project has been exciting for the city of Aarhus as it represents a whole new mindset. The terminal is also promoted to larger companies that employ people from the surrounding areas, such as Randers and Djursland, that do not have parking spaces for all their employees. The companies can keep company bikes at the terminal and thereby offer their employees a healthy transport alternative.

The terminal has received good feedback from users and the individual parking booths have also proved to be popular - in the first year they had 25 satisfied users. The biggest challenge has been to share information about the new facility to citizens. In order to find users for the individual parking booths several announcements in local newspapers were published. However, the most successful way to find interested people was to directly contact companies located in the area.

Overall the project has been a great success and it has received a lot of national media coverage. In the upcoming years the the City of Aarhus plans to build more Park and Bike Terminals within a 5 to 10km radius of the city centre.