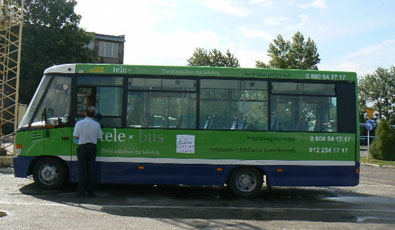 In order to better customize PT to the needs of the citizens the City of Krakow introduced and tests a new demand responsive transport service in a chosen area of three districts. The DRT service in Krakow will be the first flexible PT service on the national scale. The implementation of the service in Krakow is based on technology from Genoa.

To enlarge PT reach and increase PT patronage in a chosen area by introduction of a new demand responsive transport service which is better customized to the potential needs of the passengers.

In the chosen area for the implementation of the DRT, i.e. Rybitwy, Podwierzbie and part of Biezanow, a region of low population density, the public transport offer is limited. Bus lines in this area are based on schedules with low frequencies of runs. Therefore a main goal of the DRT implementation in the determined area is to make it easier for inhabitants to reach those stations where changes to other lines are possible.The idea of the DRT service in Krakow has been being realized by three CiViTAS CARAVEL project partners: MPK (Public Transport Company in Krakow - operator of DRT service), AMI (Agency for Flexible Services in Genoa, that gives support fo>MPK in the design and planning of the service as well as in the development of the marketing campaign) and Softeco Sismat from Genoa (responsible for providing DRT software and customizing it to the needs of MPK).

MPK launched the demand responsive services named TELE-BUS in July 2007. The service implementation was preceded by the service model designing along with the adaptation of the software for DRT management to the needs of MPK. All these activities were conducted with great support of AMI and Softeco.The communication and marketing campaign, prepared by MPK with support of AMI, began two weeks before the launch of the service. The campaign included direct meetings with stakeholders (District Council and inhabitants of the implementation area), production and distribution of leaflets, posters and gadgets, press releases, information and short interviews with DRT specialists in local radio and TV channels, and a press conference with participation of politicians from Krakow and Genoa.