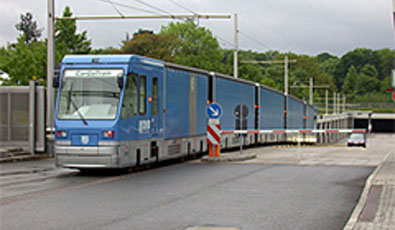 Inner city goods transport is responsible for air pollution, congestion and noise annoyances. The project of a Cargo Tram in Amsterdam was launched in 2007 by the company CityCargo Amsterdam with the objective of reducing the number of trucks in the inner city. According to their initial feasibility study, up to half the lorry movements in the city could be replaced by trams thus cutting pollution by 20%.

CityCargo operated two cargo trams for a testing phase on the existing tram network between 7 March and 3 April 2007.

Trucks supplied the trams during the pilot at de Aker, the end stop of tram 1 in Osdorp. The trams run along a specially selected route through the city between 7am and 11pm. Two transfer points were located on the route between Plantage Parklaan and Frederiksplein, where the goods were unloaded onto small electrically powered vehicles (E cars) which enabled the delivery of the goods to their final delivery address.

During the test, two specially adapted GVB trams operated between Osdorp and the city centre. For the first two weeks the trams travelled empty, to assess the traffic situation along the route. Passenger tram schedules were not affected by the cargo trams because the cargo trams did not use passenger stops.

During the second phase the trams transported actual goods. Since the pilot was successful, CityCargo Amsterdam was allowed to use the Amsterdam tram network to transport goods with a 10 years concession from the Municipality.

As a result of this testing phase, CityCargo estimated around 50 special cargo trams and around 400 E cars to be operated in 2008 in order to supply shops, supermarkets and the catering industry in the centre of Amsterdam. The system was also presented as very cost efficient: 1 cargo tram can transport the same amount of goods as 4 (7.5 ton) trucks.

The estimation of impacts on health and the environment reported a reduction of up to 16% in particulate matter, carbon dioxide (CO2) and nitrogen oxides (Nox) as well as more efficient loading  and less noise pollution in the city because noisy trucks will be replaced by quieter trams.

Amsterdam's cargo tram initiative went bankrupt in 2009 as the city refused to contribute to the extra tracks needed. ù

The city was officially in favour of the project but on the condition that it works without subsidy. The cargo tram's operator City Cargo raised 69 million Euros from companies such as Nuon and Rabobank, and asked the city to contribute 5.6 million towards this track work.