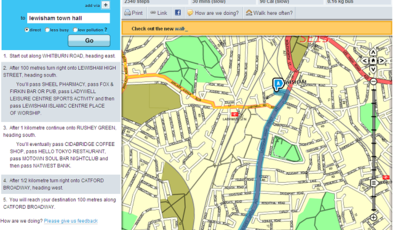 As part of their activities to reduce air pollution, the London Borough of Lewisham promotes walking as the most sustainable transport mode. As changing people’s travel behaviour remains a huge challenge, Lewisham Borough Council decided to encourage walking by introducing a new local route planning tool.

Lewisham’s Environmental Protection Team is in charge of air quality issues and set up the route planner, as one of many measures, in order to:

Lewisham is one of 33 administrative units in Greater London and engaged with neighbouring authorities in order to implement the route planner. This resulted in better cost efficiency and allowed routes to cross boundaries. It also led to funding from the DEFRA Air Quality Grant, given by the UK Department for Environment. The grant eventually fully covered occurring costs. However, human resources had to be allocated by the participating Boroughs from present staff, including time for updates following the tool launch. The five neighbouring authorities Bromley, Croydon, Greenwich, Merton and Wandsworth were all keen to participate.

The route planner was set up with walkit.com, a web-based route planner for walking in urban areas. The Walkit team digitises maps and creates routes based on the available data. Data conditioning the route planning was provided by the six London Boroughs on local points of interest, landmarks and their alternative names, as well as locally known short-cuts, not identified on official maps. It transpires that a person in charge with sufficient time and local knowledge is essential to obtain good data; the better the quality of input, the better the outcome.

Following the additional data input provided by the six London Boroughs, Walkit now allows users to choose direct routes, hilly or non-hilly routes, or low pollution routes. The information on air quality is derived from an interpolated data grid. To provide this feature, regularly updated local air pollution data is required from a number of locations.

Distance, walking time, calories and a calculation of environmental benefits, such as saved CO2 emissions compared to driving or using London Underground, are also displayed. MyWalkit.com allows users to personalise the route planner for more accurate information on time or preferred locations. The route planner has been made available as a smart phone app, which guides users along the chosen track using GPS.

As a result of the additional data input in 2010, most of Greater London is now covered by the Walkit route planner, though with varying levels of detail. London is also among the few cities offering specific low pollution route calculation. The number of route requests in south London exceeds 3000 per month and the “direct route” is the most popular profile which proves the route planner’s significance as a transport alternative.

Lewisham Borough staff have received anecdotal evidence from talking to people about whether or not it has changed their travel habits. The Borough Council is now considering how to carry out formal consultation to quantify the success of the route planner.